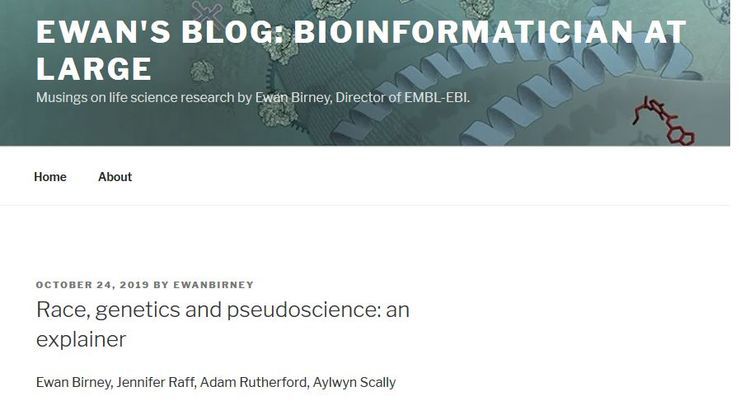 This essay by four academics is supposed to be a thorough debunking of the reality of human biodiversity:

Human genetics tells us about the similarities and differences between people – in our physical and psychological traits, and in our susceptibility to disorders and diseases – but our DNA can also reveal the broader story of our evolution, ancestry and history. Genetics is a new scientific field, relatively speaking, merely a century old. Over the last two decades, the pace of discovery has accelerated dramatically, with exciting new findings appearing daily. Even for scientists who study this field, it’s difficult to keep up.

Amidst this ongoing surge of new information, there are darker currents. A small number of researchers, mostly well outside of the scientific mainstream, have seized upon some of the new findings and methods in human genetics, and are part of a social-media cottage-industry that disseminates and amplifies low-quality or distorted science, sometimes in the form of scientific papers, sometimes as internet memes – under the guise of euphemisms such as ‘race realism’ or ‘human biodiversity’. Their arguments, which focus on racial groupings and often on the alleged genetically-based intelligence differences between them, have the semblance of science, with technical-seeming tables, graphs, and charts. But they’re misleading in several important ways. The aim of this article is to provide an accessible guide for scientists, journalists, and the general public for understanding, criticising and pushing back against these arguments.

Human population structure is not race

Racial categories, as most people understand them today, have some of their roots in the development of scientific thinking during only the last few centuries. As Europeans explored and colonised the world, thinkers, philosophers and scientists from those countries attempted to apply taxonomic structures to the people that they encountered, and though these attempts were many and varied, they typically reflected sharp geographic boundaries, and obvious physical characteristics, such as pigmentation and basic morphology – that is to say, what people look like. Research in the 20th century found that the crude categorisations used colloquially (black, white, East Asian etc.) were not reflected in actual patterns of genetic variation, meaning that differences and similarities in DNA between people did not perfectly match the traditional racial terms. The conclusion drawn from this observation is that race is therefore a socially constructed system, where we effectively agree on these terms, rather than their existing as essential or objective biological categories.

Some people claim that the exquisitely detailed picture of human variation that we can now obtain by sequencing whole genomes contradicts this. Recent studies, they argue, actually show that the old notions of races as biological categories were basically correct in the first place. As evidence for this they often point to the images produced by analyses in studies that seem to show natural clustering of humans into broadly continental groups based on their DNA. But these claims misinterpret and misrepresent the methods and results of this type of research. Populations do show both genetic and physical differences, but the analyses that are cited as evidence for the concept of race as a biological category actually undermine it.

Even though geography has been an important influence on human evolution, and geographical landmasses broadly align with the folk taxonomies of race, patterns of human genetic variation are much more complex, and reflect the long demographic history of humankind.

One thing to note is how boring and uninformative this essay is.

If they wanted to be more persuasive, they should have given more examples to back up their assertions. For example, they repeatedly claim that old scientific and popular ideas about how best to lump and split human populations have been debunked by modern genomics, but they don’t tell us which of these ideas have been disproven and what has replaced them. The essay would be far more interesting with more factual examples.

… Moreover, since it is a complex trait, the genetic variation related to IQ is broadly distributed across the genome, rather than being clustered around a few spots, as is the nature of the variation responsible for skin pigmentation. These very different patterns for these two traits mean that the genes responsible for determining skin pigmentation cannot be meaningfully associated with the genes currently known to be linked to IQ. These observations alone rule out some of the cruder racial narratives about the genetics of intelligence: it is virtually inconceivable that the primary determinant of racial categories – that is skin colour – is strongly associated with the genetic architecture that relates to intelligence.

Folks interested in human biodiversity tend to have vastly more sophisticated views than those attacked here.

But, they are Bad People, so don’t pay any attention to what they have to say, even though they tend to be well-informed and insightful. Making fools of ourselves is a small price to pay for not listening to what the Bad People have to say.