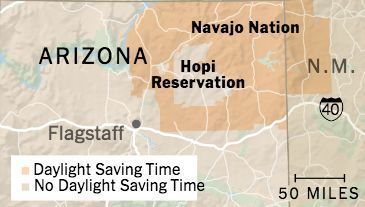 Race Does Not Exist, But the Hopi Are Still Mad at the Navajo After 600 Years … It’s that time again — daylight saving time ends at 2 a.m. Sunday, when clocks are turned back one hour. And while most people in the United States get to enjoy an extra hour of sleep, confident their phones will attend to the task of winding back the clock, two states — Arizona and Hawaii — will not “fall back” because they did not “spring forward.”…

Arizonans don’t need to save daylight, they’ve got too much of it.

O.K., not all of Arizona holds out on daylight saving. In the northeastern quarter of the state, the Navajo Nation observes the time change in the spring.

But the Hopi Nation, which is encircled by Navajo territory, does not, making it the figurative “doughnut hole.”

The Navajo Nation is semiautonomous, with the power to set its own time system. Since the Navajo reservation extends into neighboring states that recognize daylight saving time — Utah and New Mexico — the nation decided to follow suit to keep the same time throughout its land. 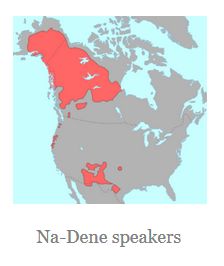 The Hopi are, I believe, descended from the original Siberian settlers of the New World, while the Navajo are from the second wave of Siberian invaders, the Na-Dene speakers, who came thousands of years later. The Na Dene were bottled up in Alaska and Canada for millennia, but then, not too long before Columbus, broke out into what’s now the American southwest. They took a lot of the territory of the Hopi, who have never forgiven them.

So of course the Hopi and Navajo don’t agree on what time it is for much of the year.

Generally speaking, there seems to be growing momentum in the U.S. for abolishing Daylight Savings Time, although more so on the Spring Ahead weekend when you get one less hour of sleep than on this Fall Back weekend. However, the U.S. tried year-round Daylight Savings Time during the energy crisis of 1974, and it proved wildly unpopular.

Perhaps having a half-hour of daylight savings year round would be a good compromise, but it would be discombobulating for people doing business internationally to have the U.S. a half hour off from the rest of the world.

It could be done: India, Iran, and much of Australia are 30 minutes off from Greenwich Mean Time, and the Chatham Islands of New Zealand are 45 minutes off.

But it seems like much of today’s anti-Daylight Savings Time opinion is just annoyance at having to think about the subject. Any changes in policy would just increase the salience of the subject.