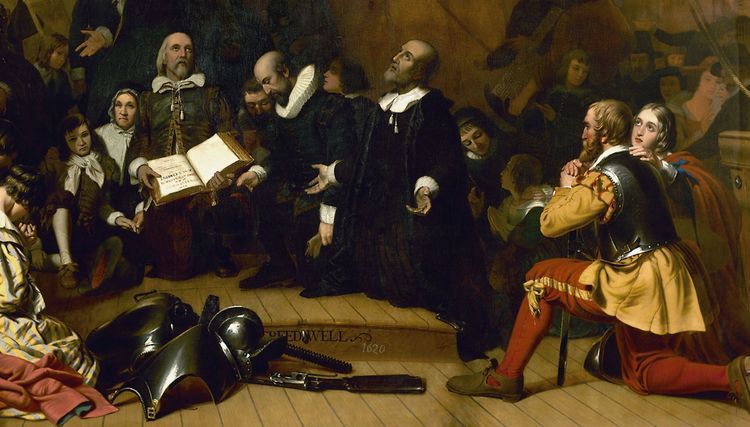 Puritans Didn't Start The War On Christmas, Because They Didn't Hate Christianity

I see this every year the War On Christmas is discussed—the claim that it started with the Puritans, the most recent example being this Time Magazine article

In recent years, conservative pundits have squared off against the assailants they blame for waging war on Christmas: politically-correct liberals and the godless Grinches at the ACLU. But the anti-Christmas spirit has far deeper roots, reaching all the way back to America’s fun-hating settlers, the Puritans.On Christmas Day in 1659, the nation’s pious progenitors were actively not celebrating the holiday, which was banned in the colonies that year and not legalized again until 1681.[More]

In 1659, Oliver Cromwell had just died, but there was still a Puritan Roundhead government in England, and Christmas was also banned in England. It was not banned because it was too Christian, but because, from the point of view of the Puritans, it wasn't Christian enough, or perhaps I should say it was Christian in the wrong way.

'Trappings of popery and rags of the beast'. Mince-pies, mummers, holly and church services all fell victim to a determined Puritan attempt to stamp out the celebration of Christmas under the Commonwealth

This was nothing like the secular/respect for non-Christians/multicultural War on Christmas today, where you can't have a candy cane because someone thinks it's Christian. The Puritans didn't do multicultural.

The revolt against Charles I in the 1640s was led originally by men who believed that his government was determined to outlaw their traditional Calvinist religious beliefs and eventually to reunite the Church of England with Rome. The events of the Civil War soon brought to prominence among the Parliamentarians many Puritans whose psychological makeup made them suspicious of geniality, contemptuous of excess and paranoid about the anarchic potential of carnival. It was these men who launched the attack on the traditional Christian festivals of the English calendar.

In a way, it was Christmas that won the English Civil War, and led to the Restoration of King Charles II in 1660

However, by perceiving these essentially harmless and deeply cherished folk customs to be a threat, they succeeded only in alienating large numbers from the new regime they had established. John Morrill has recently pointed out that the Parliamentary colonel John Lambert came to see the English people's persistent attachment to Christmas as a symbol of their refusal to accept his revolution. Much the same view was expressed by one contemporary Parliamentary pamphleteer who reported that the Royalists 'cry unto the people':

What, pull down common-prayer, plum pottage and Whitsun ales; Was there ever such a sacrilege and profaneness. Rather than so, come along to battle.

They admitted that 'grand festivals and lesser holy-days... are the main things which the more ignorant and common sort among them do fight for'. The attack on Christmas was thus one of the Parliamentarians' biggest mistakes, and one which was ironically the result of anxieties, originally misconceived but ultimately self-fulfilling.

However, the point, once again is that however misguided the Roundheads may have been, their motives were entirely different. They were for Christ and Christianity. The modern War On Christmas is about hatred of both.