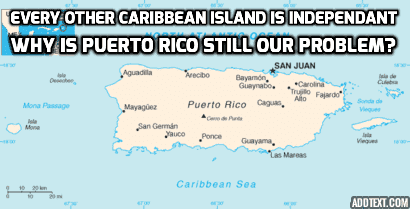 Seriously, why does America rule a populous Spanish-speaking island in the Caribbean?

It's just a leftover from the era of Teddy Rooseveltian American imperialism, a war prize from the Spanish-American War of 1898. It's hard to figure out from Googling around why the U.S. government ever wanted Puerto Rico.

In contrast, there was at that time a popular notion that owning the Philippines would pay off for America because the Philippines were said to be the key to opening the door to the China trade, and if all 300,000,000 Chinamen bought a pair of American shoes, that would be 600,000,000 shoes! Well, maybe, maybe not, but at least the Philippines land-grab had a theory to explain it.

But what was Puerto Rico supposed to be the key to: the Haiti trade?

The only theory I've ever heard of why the U.S. wanted Puerto Rico was that it was supposed to protect the approaches to the Panama Canal. Yet, I don't see any evidence that Teddy's strategic oracle, Admiral Mahan, thought much of Puerto Rico's strategic value. In the chapters on naval strategy in the Caribbean in his 1911 book, Mahan barely mentions Puerto Rico, and instead spends many pages salivating over Jamaica's strategic location. (The U.S. closed its last naval base in Puerto Rico, Roosevelt Roads, in 2004, relocating its operations to Florida. In 2003, the Navy gave up on its Vieques firing grounds after protests.)

As far as I can figure, the U.S. kept Puerto Rico more or less as a souvenir of that "splendid little war" with Spain. We couldn't keep Cuba, which with its huge length, long coastline, and more developed economy, was sort of worth something strategically and economically, because we had gone to war in the name of Cuban independence. So we demanded Puerto Rico as an "indemnity" from Spain for making us declare war on them by their being so colonialist.

Cuba helped bankrupt the Soviet Union by costing the Russkies about $6 billion per year in subsidies. Economist Art Laffer estimates that Puerto Rico costs the U.S. government almost four times as much, mostly in tax breaks to corporations. And the cost of Open Borders between Puerto Rico and the U.S. has been sizable, especially to Eastern Seaboard cities during the decades before the government started bribing Puerto Ricans to stay home. And Puerto Ricans become instantly eligible for affirmative action benefits the moment they step off the plane in the 50 States, which doesn't do Americans any good.

The U.S. pays Puerto Ricans to conduct all their politics around the statehood v. commonwealth polarity, but nationalism remains in their hearts: Puerto Rico sends its own teams to the Olympics and the World Baseball Classic, and Puerto Ricans cheer loudly when their teams beat the Americans.

And why shouldn't they? It's only natural for an island nation to feel little emotional tie to the continental power that conquered them, especially if they have different languages.

Puerto Rico is never going to progress like Hawaii did into an English-speaking place where Americans would want to settle. It's full of Puerto Ricans. (Hawaii has almost twice the land mass of Puerto Rico but less than one-third the population.)

Recent referendums in P.R. have been slightly tilted toward staying a subsidized colony, but someday "statehood" will win a referendum. And then the Democrats will have a field day demanding that we respect the wishes of the Puerto Rican people and give the Democrats two more U.S. Senators.

It's time for Puerto Rican independence.