Who didn’t see this coming? Thousands of Puerto Ricans are escaping their island’s flattened infrastructure to get to a place where things work — because, as American citizens, they can. 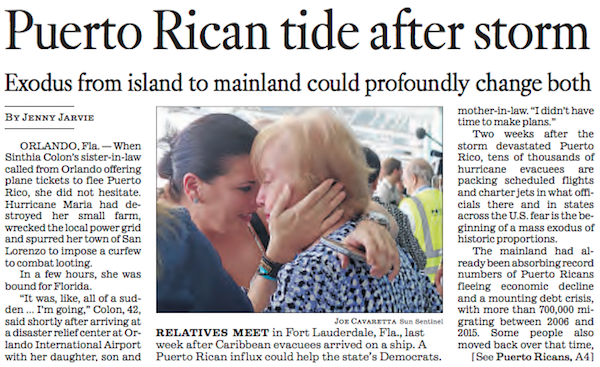 Who can blame them for skedaddling en masse when the lights don’t turn on? What’s perplexing is how an island of Hispanics with no cultural similarity or connection to the United States whatsoever got to be citizens. Interestingly, a March poll found that only 47 percent of Americans believed that residents of Puerto Rico are actually US citizens. Those 47 percenters must have missed the sentence in their high school history book where the US took possession of the island in 1898 following the Spanish-American War.

Say, perhaps Spain would like to have the island back. . . they could at least talk to each other. The US Census found that 95 percent Puerto Ricans do not speak English at home.

So if this curious statement is accurate, the United States could divorce Puerto Rico without any harm to the residents because they are already bi-national and have a spare citizenship, so they wouldn’t be stateless. Puerto Rican independence would work out fine on the citizenship front and might be the only way to keep the whole bunch from moving here.

Puerto Ricans fleeing their hurricane-ravaged island are pouring into the U.S. mainland,

When Sinthia Colon’s sister-in-law called from Orlando offering plane tickets to flee Puerto Rico, she did not hesitate. Hurricane Maria had destroyed her small farm, wrecked the local power grid and spurred her town of San Lorenzo to impose a curfew to combat looting.

In a few hours, she was bound for Florida.

“It was, like, all of a sudden … I’m going,” Colon, 42, said shortly after arriving at a disaster relief center at Orlando International Airport with her daughter, son and mother-in-law. “I didn’t have time to make plans.”

Two weeks after the storm devastated Puerto Rico, tens of thousands of hurricane evacuees are packing scheduled flights and charter jets in what officials there and in states across the U.S. fear is the beginning of a mass exodus of historic proportions.

The mainland had already been absorbing record numbers of Puerto Ricans fleeing economic decline and a mounting debt crisis, with more than 700,000 migrating between 2006 and 2015. Some people also moved back over that time, but after decades of population growth, the island saw the total number of residents drop from about 3.8 million to 3.4 million — or more than 10%.

The majority of those who moved were of working age, compounding the economic damage.

Now that cycle is poised to accelerate in a migration that could have profound implications for the rebuilding of the island and for U.S. politics.

“This has no historical precedent for the United States,” said Jesse Keenan, a Harvard professor who specializes in climate adaptation and resilience.

“If just 10% of people leave, it’s going to have a huge impact, both in Puerto Rico and on the mainland,” he said. “If as many as 20% left, which wouldn’t surprise me, it would completely collapse the island’s economy and burden jurisdictions across the United States.”

As U.S. citizens, the evacuees have a legal right to move anywhere in the country. Many are bound for Florida, which is already home to more than a million Puerto Ricans, or nearly a fifth of the 5.4 million living in the 50 states.