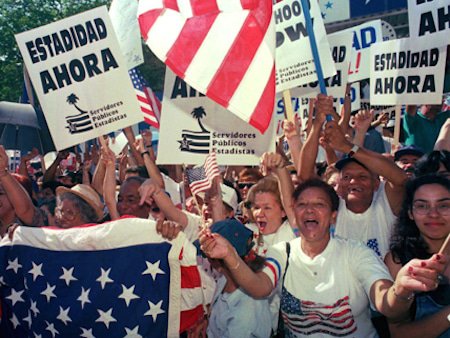 Among the top worst ideas for America is to make Spanish-speaking, welfare-addicted, deeply corrupt Puerto Rico a state. Some Republican Presidential candidates — Marco Rubio, Jeb! Bush and Ben Carson — are strong proponents, as noted in a recent Fox News report about the territory’s money troubles:

MARCO RUBIO: I support statehood if that’s what they determine that they want.

JEB! BUSH: I have long been a supporter of statehood.

BEN CARSON: I would be incredibly honored and delighted for Puerto Rico to become the 51st state.

Marco says it’s up to Puerto Ricans to choose statehood, as if the opinion of the American citizens doesn’t matter. It’s not exactly a hot topic these days, although a 2012 Angus Reid poll found just 21 percent of Americans supported Puerto Rico becoming a state. A 2013 Rasmussen poll determined that only 12 percent of voters believed it would be beneficial for the nation to add ANY new states, including the District of Columbia, and a plurality (44%) had the opinion that it would be harmful to increase the number of states.

Shallow Republican candidates often think support for PR statehood is a way to cop an easy vote from Hispanics. Candidate Mitt Romney professed his allegiance to a diverse 51st star.

Newt Gingrich has been one of the worst offenders, since he clearly thought that his promotion of the idea was a brilliant political stroke. In 2009 he set up a two-language website “The Americano” to explain conservative values to Hispanics — which no longer exists, for some odd reason.

Arguably the worst aspect of PR statehood would be the official “bilingual” (aka Spanish) nose shoved even further under the tent. Our culture is fragmented enough already from decades of forced immigration diversity without now pushing the Spanish language as a norm. Many jobs in immigrant-flooded areas require Spanish, so Americans are at a disadvantage.

To see how official bilingualism works, watch how a political speech works in Canada: a couple minutes in English, a couple minutes in French — repeat, repeat, repeat. It’s incredibly inefficient, not to mention boring. Canada at least has the excuse of history, unlike America which has failed to defend its territorial integrity and allowed the invasion of a big-government tribe.

How rotten corrupt is Puerto Rico? Expecting a bailout from stupid-generous Washington, it recently handed out $120 million in Christmas bonuses to government employees, despite being more than $70 billion in debt.

That attitude is not surprising. Puerto Ricans believe everything is free in America — Leonard Bernstein told us that: