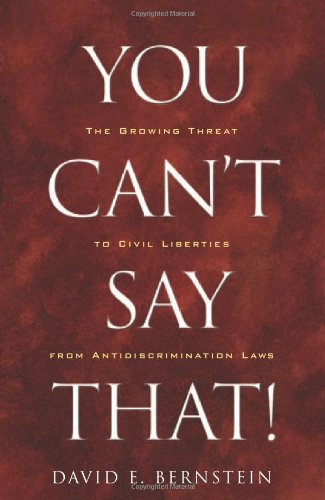 David Bernstein is the author of You Can't Say That:The Growing Threat to Civil Liberties from Antidiscrimination Laws, and a contributor to the Volokh Conspiracy. In a recent post he seems to feel that government censorship of government employees is unavoidable, and almost welcomes it in the case of Michael Regan.

Allegany County, New York, Prosecutor Michael Regan was fired from his job for attending the American Renaissance conference while suspiciously well dressed. He had apparently given his name to a reporter at the Washington Post, and when it was published, various people asked for Regan to be fired. Bernstein writes:

On the other hand, the government may fire a prosecutor who attends racist meetings, given that having such a prosecutor on staff is likely to reduce public faith in the fairness of the justice system.Yes, I'm troubled by the fact that the government, acting as employer, has such censorious powers. In the case of the prosecutor, it's pretty much unavoidable.

I wrote five years ago that the attempt to make government employees toe the ideological line on "diversity" was a violation of Civil Service laws, which, outside of political appointments, make it illegal to fire a government employee for being a member of the wrong political party.

The American Renaissance conference is legitimate group meeting to discuss political ideas. While it's non-partisan, it tends to be part of what we think of as the right wing. And while what Steve Sailer calls the "Righteous Right" would indignantly deny any resemblance, we all look alike to Julian Bond.

While it's true that David Bernstein is a law professor, and I'm not, I think Regan has a definite case that he's being discriminated against for political reasons.

Oddly enough, there is no such thing as a white prosecutors association, but the black and Hispanic prosecutors organizations have explicitly racial goals.