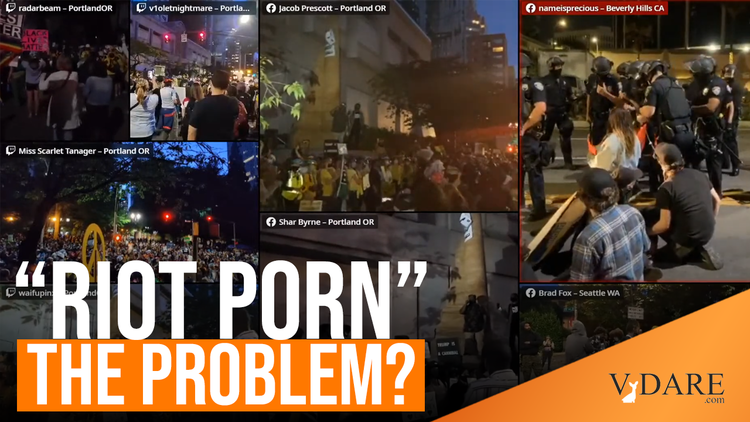 Weak organization forced right-wing agitators to rely on video and social media. Now they have a machine to spread a narrative of lawless rioting.

… This past summer, the recorded murder of George Floyd—just one in a seemingly endless line of merciless and vicious events perpetrated by police against Black people, from Selma to Mike Brown, from Rodney King to Sandra Bland and Jacob Blake—motivated millions of people worldwide to protest against police brutality. …

And visuals can be just as motivating for the right wing—recently, perhaps even more so.

Because right-wing reactionaries do not have the same kind of experience in organizing street protests as the left, they instead rely heavily on social media—particularly Facebook, YouTube, and Twitter—to mobilize crowds. Their efforts to counter the wave of public support for Black Lives Matter protests have made extensive use of this tactic. …

Since the George Floyd protests, conservative media outlets including Fox News (particularly Tucker Carlson and Sean Hannity), One America News, Glenn Beck’s BlazeTV, and right-wing YouTubers have been covering Black Lives Matter and other left-wing protests daily, specifically highlighting instances of violence, fighting, and property damage. This coverage has come to dominate the right-wing narrative in a new way, flipping the script to suggest that Black protesters—demonstrating because they fear police violence—are themselves a threat to white people.

Mainstream media bias toward covering violence in protests is well studied, best encapsulated by the saying “If it bleeds, it leads.” Most protests are largely peaceful, but “Citizens gather, grieve, and leave” is no story at all. This directs a disproportionate amount of attention across the entire media ecosystem to violent protesters. Now, with social media as a broadcast system, the right-wing media has upped the ante.

According to analysis I conducted using MediaCloud, a research tool from MIT and Harvard, right-wing media outlets wrote five to six times more articles about Seattle’s “Capitol Hill Autonomous Zone” than did center or left media. What has been a minor storyline among left-wing audiences has been dramatically overemphasized by right-wing media because these protests provided plenty of visceral content for online content creators.

… These narratives have been intensified and supplemented by the work of right-wing adversarial media-makers like Elijah Schaffer and Andy Ngo, who collect videos of conflict at public protests and recirculate them to their online audiences. Both have even gone “undercover” by posing as protesters to capture footage for their channels, seeking to name and shame those marching. Their videos are edited, decontextualized, and shared among audiences hungry for a new fix of “riot porn,” which instantly goes viral across the right-wing media ecosystem with the aid of influential pundits and politicians, including President Donald Trump. The footage has a hypnotic, almost balletic quality, designed to influence and overwhelm the sense-making capacity of watchers consuming it from a safe distance online.

The latter is helpful to The Cause, while the former is not helpful.

Whereas, as we all know, the Peaceful Protesters were peaceful.

… Outrage contagion is why the McCloskeys, the husband-and-wife duo who pointed guns at Black Lives Matter marchers in St. Louis, were motivated to take their bizarre stand.

It had nothing to do with them devoting 30 years to restoring the finest house in St. Louis only to see a mob break down a gate and surge onto private property.

… Kevin Roose of the New York Times pointed out that the majority of people on Facebook are witnessing a radically different narrative from the one presented to consumers of mainstream media. …

And yet, as the events of the last week have shown, wave after wave of white vigilante violence has followed. … That same night, a member of the far-right group Patriot Prayer was murdered, but no details on the shooter are available. Nevertheless, the media narrative on the right is clear: antifa must have done it. …