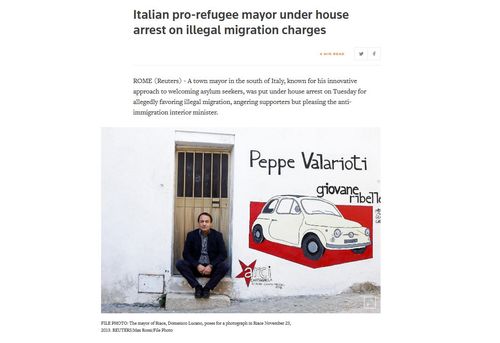 Once again, Italy shows the way.

Riace Mayor Domenico Lucano, a favorite of international journalists and thus a fierce enemy of his own people, was detained on charges on aiding illegal immigration.

The mayor of an Italian town that has won praise and TV publicity for integrating thousands of refugees has been placed under house arrest on suspicion of abetting illegal migration.

Riace mayor Domenico Lucano – hailed in 2016 by Fortune magazine as one of the world’s 50 greatest leaders – is also accused of fraudulently awarding contracts for waste disposal as well as organising “marriages of convenience” between local men and foreign women...

It also follows the suspension by the public broadcaster, Rai, of a TV show about Riace, which had been lauded as an exemplary model for integration.
[Pro-refugee Italian mayor arrested for 'aiding illegal migration,' by Angela Giuffrida, Guardian, October 2, 2018]

Lauded by whom? Matteo Salvini isn't just doing some lackluster enforcement of immigration laws. Instead, he's systematically dismantling the pro-invasion apparatus, including the so-called "NGO's," the lawbreaking politicans, and the anti-Italian media outlets. Here in America, the Trump Administration's half-hearted measures have created leftist hysteria, but they have done very little to really change the equation when it comes to illegal immigration. (And there is still no wall.)

Italy is a far better example to follow. However, that's because Salvini isn't governing as a "conservative," but as a nationalist and a populist, confronting the establishment that benefits from illegal immigration. He's shutting them down, not giving them tax cuts.

The government is also looking into how illegal immigration may have furthered corrupt financial arrangements.

[The Mayor's partner, Tesfahun] Lemlem was banned from living in the town area, it added. The prosecutor’s statement also accused him of fraudulently farming out the local waste management to two co-operatives rather than carrying out the required tenders and said a broader enquiry would look into the possible mismanagement of public funds, earmarked for migration projects...

Riace’s model jars with a clampdown on irregular immigration by the national government, which last week approved a decree aimed at cutting the number of asylums granted and doubling detention time for irregular migrants.

“Gosh, I wonder what ... all the goody-goodies that would like to fill Italy with migrants will say,”, Interior Minister Matteo Salvini said on Twitter in reaction to news of Lucano’s house arrest.