The recent Libyan adventure/war unleashed by the President is a fine indicator of Obama values. Even establishing a mere no-fly zone over a camel-filled country is not exactly peanuts, but once BHO had made up his mind, he sent an array of planes and bombs into the fray, in which the "rebels" America is defending appear to be just another gang of hostile jihadists.

Let's compare another, more immediate security concern. The Mexico border remains sieve-like and is clearly not a top priority in Washington, despite the worsening descent of the hispanic nation into chaos. 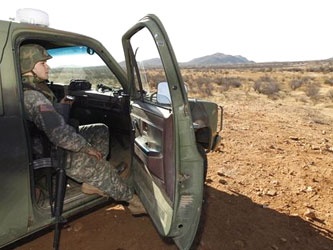 Nevertheless, the current National Guard deployment will be rolled up on July 30, despite the objections of many Congressmen from the region.

The original funding for the mission was set at $135 million, but that was later cut back to $110 million. The length of deployment was supposed to be a year, but it took the Guard several months to train and get set up.

By comparison, the Libya intervention or war, or whatever it should be called, is mounting up costs at the speed of debt. Fox reported March 20, "Each Tomahawk missile costs $600,000, according to the official, bringing the initial costs of the strikes to approximately $71 million."

WASHINGTON (CNNMoney) - With the tab already running into the hundreds of millions of dollars, the U.S. military intervention in Libya has sparked a debate over funding.

To date, the United States has spent some $225 million firing Tomahawk missiles, according to CNN estimates based on U.S. Navy figures.

The cost could reach up to $800 million to fully establish the no-fly zone and another $100 million a week to maintain it going forward, said Zack Cooper, a senior analyst for the Center for Strategic and Budgetary Assessments.

Even with spending out of favor in Washington, defense costs remain among the most controversial in the debate over how to reduce deficits.

Defense spending, in inflation adjusted terms, is higher than at any time since the end of World War II, and the United States now spends six times as much as China, the country with the next biggest budget.

To pay part of the tab for intervention in Libya, the United States is hoping to lean on other nations, especially oil rich Persian Gulf countries that have indicated financial support, according to a top State Department official who testified before Congress last week.

The costs are mounting. The price tag to replace the fighter jet that went down Tuesday with a top model could run between $100 million and $150 million, Cooper said. And fuel prices for each jet runs $10,000 an hour.

Right, there's nothing like passing the hat after the fact. That'll work.