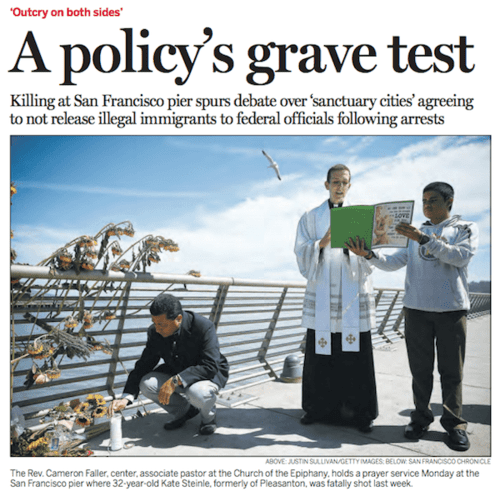 Above is a photo on the front page of Tuesday’s Oakland Tribune. It shows a Catholic priest performing a prayer at the site of Kate Steinle’s murder last week in San Francisco at the hands of a illegal alien habitual criminal. The priest, Cameron Faller, works at San Francisco’s Church of the Epiphany.

The appearance was a typical show of arrogance on the part of the Catholic church, which is arguably as culpable as all the city officials who created and maintained the sanctuary policy of protecting foreign criminals. The church has a history of supporting open borders, even to the point of rejecting pro-safety policies — like the successful Secure Communities program — in order to protect the millions of illegal aliens who reside in this country and steal American jobs.

The great majority of illegal aliens are from Latin America and are catholic. Therefore, the Catholic elites mean to protect their new pew-fillers, particularly after many Americans left the church following the voluminous priest sex scandals. In fact, 13 percent of Americans describe themselves as “former catholics.” (Incidentally, priest sex abuse stories continue to show up in local news: a Google news search for Catholic Priest Sex Trial on July 8 got 22,800 results for the previous 30-day period.)

Thought experiment: if the millions of illegal borders crossers were protestants, would the Catholic church be fighting so energetically for their “rights”?

Of course not. Vaticrats want to increase their market share in America and make the nation more Catholic.

The cassocks have spent millions of dollars to promote amnesty. Every January, the Conference of Catholic Bishops presents its National Migration Week, which erases the line between legal and illegal immigration. New York City Cardinal Timothy Dolan has characterized support for immigration enforcement as “not American.”

The bishops have worked to redefine immigration lawbreaking as religious freedom. In a 2005 article titled Church organizing anti-Minuteman campaign, (Brownsville Herald, Sept 3, 2005), priest Michael Seifert stated, “Any family in economic need has a right to immigrate, that’s our posture.”

It must be emphasized: the open-borders project is an endeavor of elite churchmen, not parishioners. Citizen Catholics do not like immigration anarchy any more than the rest of us.

But Catholic elites campaign against American interests to promote their own issue of preserving and expanding the church via demographic conquest. They are willing to sacrifice public safety to further their own power.

The top Catholics have tried to destroy Secure Communities for years because it was successful in deporting illegal aliens. ICE describes the program as an “information-sharing partnership between ICE and the Federal Bureau of Investigation (FBI) that helps to identify criminal aliens“ so it provided a vital connection between feds and local police that is absolutely necessary for enforcement to happen away from the border.

Sanctuary cities are based upon disobeying federal law and disregarding Secure Communities, which has anyway been ended by Obama. The cassocks must be happy that an anti-enforcement scheme has been substituted, the Priority Enforcement Program.

In 2012, the San Francisco Archbishop opposed Secure Communities in a rally held in a major cathedral attended by 2,000, because happy job thieves and criminals are a top priority of the church. “We cannot rest until the laws of our country reflect the laws of God,” opined the Archbishop.

Actually, Jesus said, “Render therefore unto Caesar the things which are Caesar’s” (Matthew 22:21), which means to obey the laws of the land. Jesus never said to rob Paul to pay Pedro.

See my blog about the event, San Francisco Archbishop Campaigns against Public Safety. The crime-friendly confab crudely took place on January 28, 2012, several days into the trial of MS-13 thug Edwin Ramos, who was eventually convicted of murdering Tony Bologna and his two sons (pictured below) because the gangster thought the family members were crime rivals.

The timing for the anti-enforcement rally was rather insensitive, to say the least. The Catholic church was appalling in its arrogant disregard toward crime victims of illegal aliens then, as it is today toward the Steinle family. 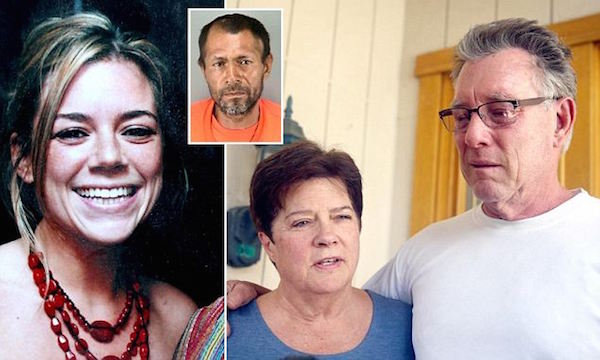