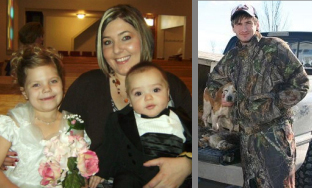 Here's the kind of headline you rarely see —Mo. town outraged over killings, illegal immigrant (Washington Post, March 20). Remarkably, the word "illegal" is prominent and local anger over the victims of immigration anarchy is noted.

In the American heartland, many communities still believe that law and borders should be respected, and certainly don't appreciate it when illegal foreigners are left to run wild and murder.

Mexican Manuel Cazares killed his ex-girlfriend and her new boyfriend, leaving three children without a parent — including his own son (the toddler shown in the photo on the lap of his mother, murder victim Amanda Thomas, along with a photo of the other dead person, Patrick Epley).

But some in this Mississippi River community of 17,000 best known as Mark Twain's hometown aren't just outraged by the violence. They also question why Cazares was in Hannibal at all.

Cazares admitted after his arrest that he is an illegal immigrant from the Mexican state of Michoacan. The 32-year-old had several run-ins with law enforcement before the homicides, but officials had never questioned his legal status.

Now he is charged with two counts of second-degree murder and armed criminal action in the Feb. 28 deaths of his ex-girlfriend, 27-year-old Amanda Thomas, and 25-year-old Carl Patrick Epley.

"I don't know how this happens," said Tina White-Masengill, Thomas' sister. "My stepdad told police many times, 'I don't even think the guy's a legal citizen.'"

During his three years in Hannibal, Cazares managed to avoid detection, despite a few traffic violations and a property damage conviction after an arrest for allegedly beating up Thomas and tearing up her home. Thomas had a restraining order against Cazares, who got probation in the property-damage case.

Police say his name wasn't in a database maintained by Immigration and Customs Enforcement. Police and Cazares' boss also say he had authentic-looking identification, including a Social Security card. And police noted that Cazares speaks fluent English.

Name? What about fingerprints? How about checking the Social Security number to see at least whether the name matches up? The perp had been in custody for various criminal activities and should have been checked out thoroughly but was not. Two people are dead as a result.

Cazares admitted he killed his ex-girlfriend (the mother of his son) and her boyfriend out of jealousy, even though she had split with him last fall. The boy will learn soon enough that his father murdered his mother — have a great life, kid. 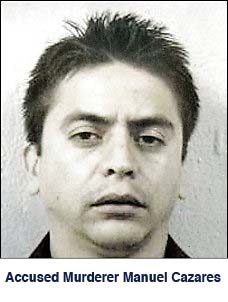