Will Uncle Sucker’s ill-considered spending of taxpayer dollars to dirtbag hellholes be pruned?? Recipient pigpens of corruption immediately began bleating in terror along with defenders of the traditional order to the news. Al Jazeera reported alarm emanating from the United Nations. Germany’s DW opined that the cuts would “diminish US influence”, suggesting that good behavior is sustained only through American bribery. The BBC characterized the cuts as a “squeeze” even though the reduction is only 28 percent of wasteful expenditures in sketchy nations.

In the following video, Ambassador James Dobbins explains the supposedly wonderful purposes for which foreign aid money is spent:

Below, Obama spent generously in corrupt regimes throughout Africa and across the Islamic world during his administration: 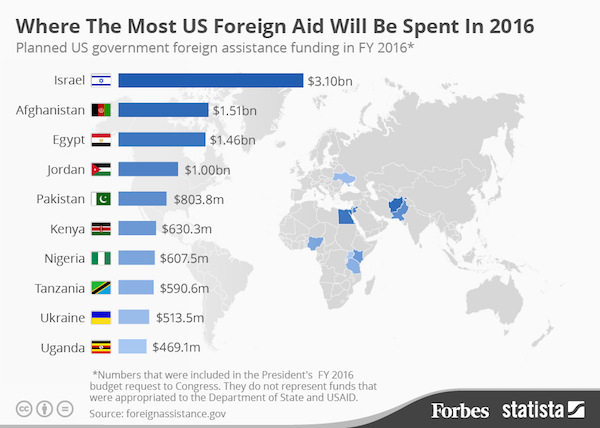 Will more billions be funneled to Afghanistan? Attempts at nation building in the future Talibanistan is the ultimate in stupid waste because the aid doesn’t work and it has fueled corruption — shocking, I know.

Instead, President Trump should spend more money to quarantine Islam because the tyrannical political system cannot be fixed.

Finally, can the United States at least end foreign aid to one of the wealthiest nations on earth? Mexico is #15 in world GDP, yet stupid America has sent our corrupt narco-state neighbor $2 billion in the last decade. That’s the figure given in a government report USAID: Mexico; Country Cooperation Development Strategy: FY2014 — FY2018 in a footnote on page 12:

7 The U.S.‐Mexico Merida Initiative is an unprecedented partnership between the United States and Mexico to fight organized crime and associated violence while strengthening the rule of law. USG funding for the Merida Initiative has totaled approximately $2 billion since 2008, with the GOM typically investing 10X USG spending in priority program areas. The four pillars of the Merida Initiative are: I. Disrupt Organized Criminal Groups; II. Strengthen Institutions; III. Build a 21st Century Border; and IV. Build Strong and Resilient Communities.

As it happens, I wrote about the Merida Initiative a decade ago: A “Marshall Plan For Mexico”—Sending Welfare To A Crack House. Foreign aid to grifter Mexico was a bad idea then and it is even more stupid now.

Interestingly, the USAID report’s cover includes a photo of young students playing violins. Does our foreign aid pay for violin instruction or kiddie orchestras in Mexico? No mention of violins is given in the paper. 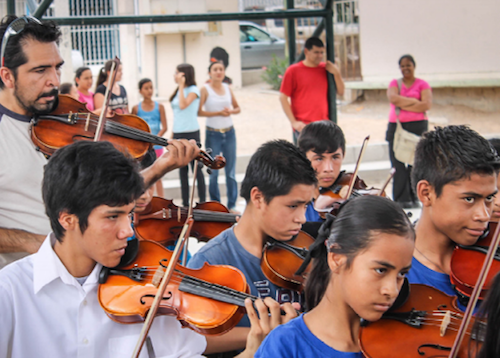