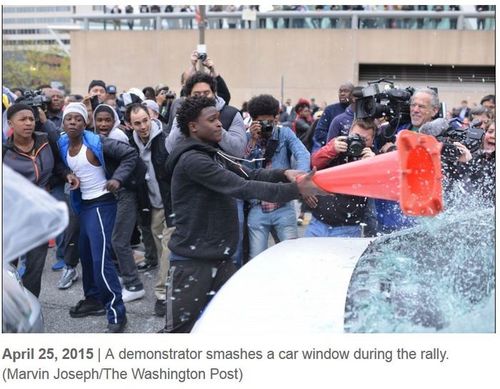 Powerline's Paul Mirengoff thinks he can explain the riots in Baltimore. The problem isn't that the black-ruled city's blacks are out of control and, having gotten tacit permission from Barack Obama and Eric Holder to burn down cities, needed any excuse to riot. The problem is liberal public policies that have wrecked the city's economy.

The Post’s reporting suggests that, at root, the protests aren’t about the police department (which, as noted, is not a White institution and almost certainly not a racist one). One of the protest leaders said:

Officials are not interested in bettering our neighborhoods. People are tired of their quality of life, and they’re frustrated nobody helps them. They want to be heard, and they will do what it takes.

In other words, a population grown dependent on public officials is lashing out because said officials aren’t helping them attain the quality of life they desire.

I agree that the hard-working people of Baltimore have been let down by public officials. For one thing, liberal public policy has encouraged dependence on “officials.” For another, liberal housing policy helped produce the economic crisis that hit Baltimore so hard. In addition, liberal education policy has undermined educational opportunity. And now, liberal immigration policy seems determined to bring in foreign laborers to compete for jobs with hard-working, low-income Americans.

Many cities across the globe pursue admittedly idiotic liberal economic policies. The American Northwest is home to a few of them. But they aren't beset by riots. Scandinavia has been outrightly socialist for years, but the crime and dysfunction in its major cities did not begin until you know who arrived from you know where.

Some day, Conservatism, Inc. will be forced to call a spade a spade. Until then, "liberal public policy" will get the blame for the woes of cities such as Detroit and Baltimore.