COLUMN | No matter where he finishes, U.S. speedskater Shani Davis remains an unfortunate exception at the Games.

SOCHI, Russia —Don’t listen to your friends back home saying the Winter Olympics are just for white people who like the cold and vacation in Aspen. This is the most inclusive Winter Games ever. Why, there are Caucasians here from almost 88 different nations.

Bada-bing! I’ll be here all week.

Actually, I will be here the next 10 days. And in that time, I will encounter no more than a dozen people of African American descent. They are the same ones I see over and over.

Maybe it’s because I lived in the District for eight years. Maybe it’s because I spent my formative years in a real melting pot: rural Oahu, Hawaii, where diversity in ethnicity and culture are part of island life. Maybe I’m just used to seeing and feeling comfortable being around a variety of people, many of whom don’t look like me.

Whatever, this place is whiter than an episode of “Downton Abbey.” ...

Sochi is one of the most multinational cities in Russia. There are ethnic Russians, about 70 percent of the population, Armenians, Ukrainians, Georgians, Greeks, Circassians, Belorussians, Tatars and Jews — which create roughly a, oh, 100 percent Caucasian stew.

Now, you are reading this and thinking one of two things: What’s with the white guilt, son? Or, What does race have to do with the greatest athletes in the world competing in their chosen disciplines, most of which just happen to be contested against other Caucasians?

Look, I don’t care about the color of the competitors. And I don’t think the paucity of black or Hispanic athletes should cheapen any gold medal, as if somehow this were a cold-war Olympics that didn’t include some of the greatest sporting nations.

Like golf waiting forever for the Tiger Woods Factor to kick in, the USOC and other nations are still waiting for that next wave of racial diversity in the Winter Games.

I do wonder what an athlete like Davis thinks when he shows up at the Games. It’s one thing to understand your chosen sport has international competitions in Norway and the Netherlands and that almost all of your competitors will be white. It’s another thing to show up on the world stage and see that hardly anyone in any sport looks like you.

Aside from the large contingent of Asian athletes

But they don't count.

and a smattering of Jamaican bobsledders and Tongans, the Opening Ceremonies’ Parade of Nations is as white as a von Trapp family reunion. ...

Is it more troubling for the Winter Games to be the province of the white or of the rich?

Winter sports are on the average much more expensive than outdoor American stick-and-ball sports. But one of the greatest misconceptions about any of these competitions is that the athletes by and large came from affluent, privileged backgrounds.

I’ve seen and heard too many stories of financial struggle and hardship to buy that. Without benefactors and major sponsorship, most U.S. athletes aren’t here.

But speaking from a purely egalitarian view

In contrast, the racial make-up of the Super Bowl champs is an example of diversity and egalitarianism and all those good things.

it would be nice to see a country like the United States have its Winter Olympic team someday more accurately represent the diversity of its population — if only because more people would care, watch, read and give someone such as Shani Davis the attention and love he and his sport deserve.

Otherwise, these Games are going to continue to resemble the inside of a giant snow globe, forever powdery white. 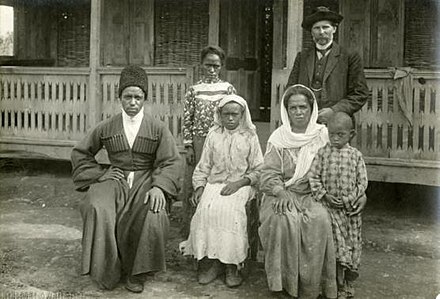 Forever hideously powdery white—Fixed that for ya.

By the way, in 1913 Russian newspapers discovered that there was a village of 500 black Africans living near Batumi in Russian Abkhazia,a couple of hundred miles south of Sochi.

Here's the Wikipedia page on Afro-Abkhazians.