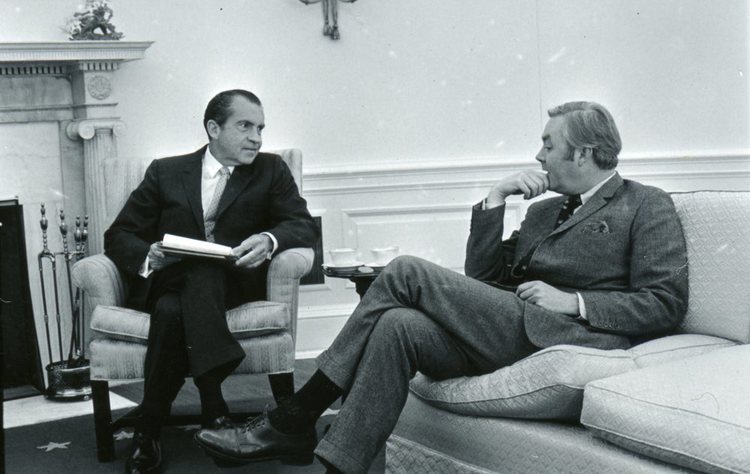 Same as the old liberal theory on race ...

In Slate, an extremely self-confident youngish white guy named Tanner Colby is writing a long series about how he started to reading up on race a few years ago and had the revelation that everything his fellow liberals know about race is wrong, and all that's leading up to him revealing his New Solution to the Race Problem in a future article.

For example, Colby explains, affirmative action is bad for blacks because it was started in 1969 by Richard Nixon who assume—Can you believe it?—that blacks tend to be good at sports and Asians good at math.

The Massive Liberal Failure on Race

In 2009, I attended the NAACP’s 100th annual convention at the Midtown Hilton in New York. Not just the centenary celebration for the nation’s oldest civil rights organization, this was also the group’s first convention under our newly inaugurated black president. The theme of the week’s events was to pay homage to the great civil rights victories of the past while at the same time defining a new mission for the next century. But on the night NAACP President Benjamin Todd Jealous took the stage for his big speech, when the subject turned to affirmative action, he didn’t sound like he was charting a new course so much as doubling down on the orthodoxy of the past. “The only question about affirmative action,” Jealous declared, “isn’t whether or not we need the hammer. The only question is whether or not the hammer is big enough!”

The line was met with thunderous applause. At the time, this didn’t really stand out to me, because, like a lot of well-intentioned but minimally informed white liberals, I believed in affirmative action. I didn’t have terribly strong convictions about it, but given America’s history it generally seemed like “the right thing to do.” That was five years ago. Then, in the course of writing a book about the history of the color line and our efforts to erase it, I took a closer look at the origins of affirmative action, and its results. Having done so, I’m a believer no more.

In part because of recent Supreme Court cases like Fisher v. Texas, the current national conversation about affirmative action has focused mostly on its use in college admissions, but my focus here will be on affirmative action in the white-collar workplace, the failure of which I observed up close during my years in the advertising industry. Race-conscious policies in college admissions and corporate hiring are different creatures, with different pros and cons, but I came to see that they also share some common, troubling flaws.

When I think back now to the rousing applause affirmative action earned at that Hilton ballroom, I can’t help but wonder why, 45 years down the line, liberals like Jealous are still so fervently devoted to a program so plainly inadequate and ill-conceived from the start. Having botched the effort to integrate American schools through the overzealous misuse of an otherwise valuable instrument, the school bus, the left’s second great blunder on race was pinning the economic fortunes of black America on affirmative action.

... That Richard Nixon was racist is well beyond dispute—he believed that, moral objections to abortion aside, the practice was justified in the case of mixed-race pregnancies.When giving instructions to the aide who scheduled his appointments and photo ops, Nixon said the Oval Office calendar should have “just enough blacks to show that we care”—setting a precedent for Republican racial engagement that stands to this day. But Nixon wasn’t just racist in the sense of thinking blacks inferior; he was racist in the sense that he subscribed to an actual taxonomy and hierarchy of race—the idea that different groups possess inherent qualities. Asians are smart and industrious. Jews are crafty but lack moral fiber, and so on. When the first wave of studies were published purporting to show that blacks have lower IQs than whites, Nixon, in a conversation with domestic aide Daniel Patrick Moynihan,

What Colby is fumblingly referring to is not the first test results showing racial differences in IQs, but UC Berkeley professor Arthur Jensen's 79-page metanalysis "How Much Can We Boost IQ and Scholastic Achievement?" of tests and intervention programs designed to Narrow the Gap in Harvard Education Review. Nixon thought this topic so central to understanding how America works that he assigned his top domestic aide, the famous Democratic social scientist Daniel Patrick Moynihan, to keep him updated on the science in the debate.

said he “couldn’t agree more” with the findings. The president was quite generous on the subject of what black people were good at: “Athletics isn’t a bad achievement. You look at the World Series. What would Pittsburgh [presumably, the 1971 team with an outfield of Willie Stargell, Al Oliver, and Roberto Clemente] be without a hell of a lot of blacks?” But he was far less charitable when it came to black talent in other areas: “… when you get to some of the more shall we say profound, rigid disciplines, basically, they have a hell of a time makin’ it. … In terms of good lawyers, even though a lot of them go to law schools, I mean, it is not really their dish of tea.”

.... But to judge from the rhetoric that still surrounds the issue, most progressives are nowhere near ready to admit the truth: that the liberal establishment pinned the economic hopes of the civil rights revolution on a program set up by a president whose racial philosophy was based on the idea that blacks make great athletes and Asians are good at math.

Whereas in 2014, we are so much better informed than Nixon, Moynihan, and Jensen were over 40 years ago. We've had 45 years of experience that proves them wrong, wrong, wrong. For example, here's a picture showing the many Asians who play on the 2014 Super Bowl-winning Seattle Seahawks defensive unit: 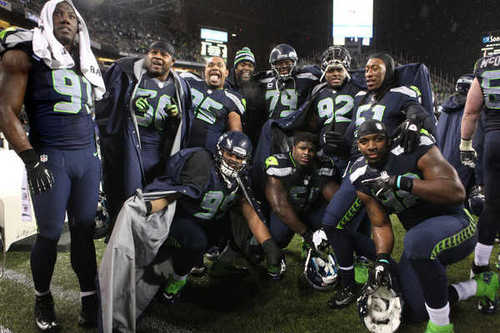 Seriously, Tanner is just the latest in a common pattern. Some youngish white person gets interested in the topic of race and quickly decides that All Those Idiots in the Past got it wrong and he can come up with a much better policy solution (which Tanner promises to unveil Real Soon Now). Maybe he really will come up with a brilliant breakthrough.

But it's hardly encouraging that he can't even imagine questioning the conventional wisdom's strongest roadblock to thinking constructively about race policy: the underlying assumption that it can't possibly be true that blacks tend to be better at athletics and Asians better at math.