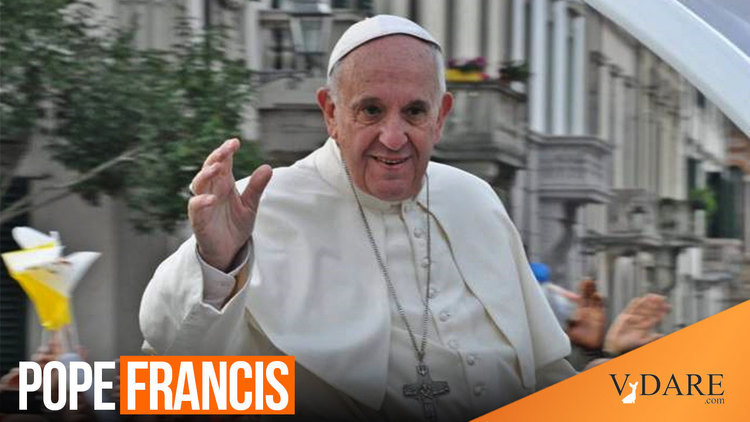 The busybody in the Vatican thinks the first world is not rescuing enough “migrants” and accepting them into their nations. Pope Francis has already written his statement for World Refugee Day in January and the highly inclusive message was recently released, titled “A Church without frontiers, mother to all”.

For a taste, here is the final paragraph:

“Dear migrants and refugees! You have a special place in the heart of the Church, and you help her to enlarge her heart and to manifest her motherhood towards the entire human family. Do not lose your faith and hope! Let us think of the Holy Family during the flight in Egypt: Just as the maternal heart of the Blessed Virgin and the kind heart of Saint Joseph kept alive the confidence that God would never abandon them, so in you may the same hope in the Lord never be wanting. I entrust you to their protection and I cordially impart to all of you my Apostolic Blessing”.

You might think that the Pope would focus on endangered Christians, who are being removed from the Middle East by murderous Islamic jihad, demanding that non-Muslims “Convert or die.” But no, he apparently believes that all refugees should be welcomed in the West, including hostile Muslims who promise to destroy Christianity and the other non-Islamic religions.

Below, the Pope’s first official trip outside the Vatican was to the island of Lampedusa (long besieged by thousands of demanding foreigners), where he welcomed Africans to Europe. 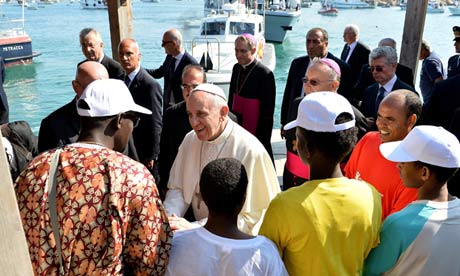 As noted here earlier, refugees are largely created by Muslim wars: World Refugee Day: Jihad on the March. There is no reason to infect the West further with the Islamic pathology of violence and supremacism. Muslim refugees should go to other Islamic societies.

The Pope has written that “authentic Islam and the proper reading of the Koran are opposed to every form of violence.” Perhaps he should stick to interpreting Catholicism, since the Koran is full of admonitions to Muslims that they commit violence on infidels who will not submit.

Nevertheless, the Pope recommends a borderless world, straight out of the liberal playbook.

VATICAN CITY (CNS) — Pope Francis called for the “globalization of charity” through an international network to fight human trafficking and ensure the rights of migrants and refugees.

The pope’s words appeared in his annual message for the World Day of Migrants and Refugees, which in 2015 will be observed Jan. 18. The Vatican released the pope’s message, “Church Without Frontiers, Mother to All,” Sept. 23.

“Large numbers of people are leaving their homelands, with a suitcase full of fears and desires, to undertake a hopeful and dangerous trip in search of more humane living conditions,” the pope wrote. “Such migration gives rise to suspicion and hostility, even in ecclesial communities, prior to any knowledge of the migrants’ lives or their stories of persecution and destitution.”

Pope Francis called on all to honor the “biblical commandment of welcoming with respect and solidarity the stranger in need.”

“Jesus Christ is always waiting to be recognized in migrants and refugees, in displaced persons and in exiles, and through them he calls us to share our resources, and occasionally to give up something of our acquired riches,” he wrote.

But individual and even national efforts to help migrants are insufficient, the pope wrote.

“Migration movements, however, are on such a scale that only a systematic and active cooperation between states and international organizations can be capable of regulating and managing such movements effectively,” he wrote.

According to the United Nations, there were 232 million international migrants in 2013, representing a rise of 50 percent since 1990.

At a news conference to present the pope’s message, Bishop Joseph Kalathiparambil, secretary of the Pontifical Council for Migrants and Travelers, said that in 2013 the number of refugees, asylum seekers and displaced persons exceeded 50 million for the first time since World War II.

“A more decisive and constructive action is required, one which relies on a universal network of cooperation, based on safeguarding the dignity and centrality of every human person,” Pope Francis wrote. “This will lead to greater effectiveness in the fight against the shameful and criminal trafficking of human beings, the violation of fundamental rights, and all forms of violence, oppression and enslavement.”

Pope Francis has made migration a signature issue of his pontificate. In July 2013, less than four months after his election as pope, he traveled to the southern Mediterranean island of Lampedusa, a major entry point for undocumented immigrants to Europe, to commemorate those who had died attempting to cross the sea from North Africa.

The pope has met with international refugees in Rome and, during a May visit to the Holy Land, in Jordan. He has also frequently denounced human trafficking, calling it a “crime against humanity.”