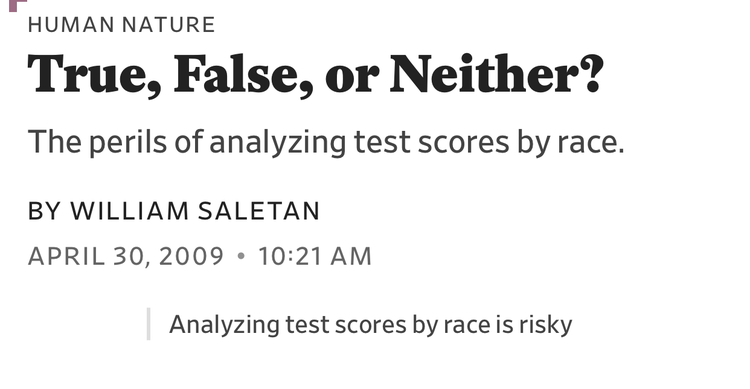 Slate's "Human Nature" correspondent got such a beat-down from his friends when he said a few things in defense of James D. Watson in 2007 that he's decided that it's best just not to think about race anymore:

True, False, or Neither? The perils of analyzing test scores by race. By William Saletan" 'No Child' Law Is Not Closing a Racial Gap." That's the New York Times headline about a report issued this week on school test scores. The  Times story begins:

The achievement gap between white and minority students has not narrowed in recent years, despite the focus of the No Child Left Behind law on improving the scores of blacks and Hispanics, according to results of a federal test considered to be the nation's best measure of long-term trends in math and reading proficiency. Between 2004 and last year, scores for young minority students increased, but so did those of white students, leaving the achievement gap stubbornly wide, despite President George W. Bush's frequent assertions that the No Child law was having a dramatic effect. Although Black and Hispanic elementary, middle and high school students all scored much higher on the federal test than they did three decades ago, most of those gains were not made in recent years, but during the desegregation efforts of the 1970s and 1980s.

TheÂ Times implies that the racial angle is important because it shows the No Child law failed. But the same angle is being touted by exponents of hereditary differences in intelligence. In fact, they're quoting theÂ Times story to validate their point. "NYT: NAEP Racial Gaps Haven't Magically Disappeared," says the headline at Steve Sailer'sÂ blog, which serves as a headquarters for believers in "human biodiversity." "Study after study, yet no one wants to introduce ol' reliable Occam," observes one commenter. Another cites a well-known paper on race, heredity, and IQ,Â asking: "Why don't they read thisâ€”it explains a lot." TheWashington Post, in its article about the test-scores report, doesn't focus on race. " 'Nation's Report Card' Sees Gains in Elementary, Middle Schools," says the Post headline. The article begins:

Math and reading scores for 9- and 13-year-olds have risen since the 2002 enactment of No Child Left Behind, providing fuel to those who want to renew the federal law and strengthen its reach in high schools. Performance on the National Assessment of Educational Progress, which offers a long view of U.S. student achievement, shows several bright spots. Nine-year-olds posted the highest scores ever in reading and math in 2008. Black and Hispanic students of that age also reached record reading scores, though they continued to trail white peers. But results released yesterday were disappointing for high school students. Seventeen-year-olds gained some ground in reading since 2004, but their average performance in math and reading has not budged since the early 1970s.

You can find the same information about the racial gap in this summary. But it isn't the focus. It's just one detail among many. Why categorize and measure students by race?

Well, one reason is because the second paragraph of the No Child Left Behind legislation reads:

An Act To close the achievement gap with accountability, flexibility, and choice, so that no child is left behind.

What is the "achievement gap"? In the NCLB's Statement of Purpose, it says:

In 2001, Ted Kennedy and George W. Bush, on behalf of all right-thinking people everywhere, placed a bet with, more or less, me — as the public face of the tiny minority of despicable bad people who follow social science statistics the way George W. Bush (or Stephen Jay Gould) followed baseball statistics.

Now, the results are coming in on the bet and Saletan says we should stop counting them.

Aren't there better ways to organize the data? "Lower-performing 9- and 13-year-olds make gains," says one section of the NAEP report[PDF]."No significant change for 17-year-olds at any performance level," says another. "Reading scores improve for 9-year-old public and private school students over long term," says a third. "Score increases for 17-year-olds whose parents did not finish high school," says a fourth. These tables organize the data by factors that can help us target and adjust educational policy: kids with low scores, kids in public school, kids in high school, kids whose parents didn't graduate. I'd like to see tables for income and spending per pupil, too.

It's not hard to look up NAEP scores yourself. Here's the 2007 8th grade Reading scores broken down by race and income. White kids whose parents are so poor that they are eligible for the National School Lunch Program outscore affluent black kids by four points and affluent Hispanic kids by one point. The gap between poor whites and poor blacks is 19 points, and the gap among not poor whites and not poor blacks is 21 points. That's what you normally get — sizable racial gaps anyway you slice it. And, of course, the percent of poor blacks and Hispanics is higher, as you'd expect from their lower test scores, since the NAEP and the marketplace measure overlapping abilities.

But race? Does that category really help? And what message does it send to kids when headlines assert a persistent "racial gap"? On this question, I'm in no position to throw stones. I've come to my cautionary view the hard way. Liberal creationistsâ€”people who think no genetically based difference can be admitted in average ability between populationsâ€”areÂ mistaken. But that doesn't make race a useful or socially healthy way of categorizing people. Beware looking and settling for racial analysis whensome other combination of categories—economics, culture, genetics—more accurately fits the data. As the NAEP coverage illustrates, that's a warning worth heeding on the left as well as the right.

The reason people all over the world and of all different ideologies can't help but be interested in race is a racial group is, fundamentally, an extended family. So, race is about who your relatives are, which is an inherently interesting topic.

Saletan has been arguing that we should just group people by looking at one gene at a time. (Of course, on average, individual gene differences will tend to follow racial lines.) But, more fundamentally, what he doesn't get is that racial groups have an existence independent of genetics. They are fundamentallygenealogical entitities—who begat whom. Unsurprisingly, when you stop and think about it, the genes tag along with the begats.