Polls Show Failure of Obama Administration on Basics of Governance 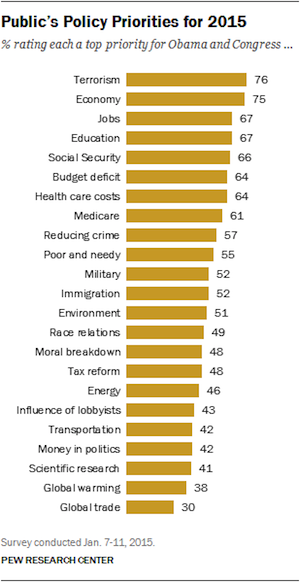 A couple of recent surveys reveal deep unease among the voters about White House competence to run the nation. While Obama frequently touts an improving economy, the citizens apparently haven’t gotten the memo, and nearly two-thirds said it still feels like recession to them, according to a January Fox News poll:

The poll reveals that a 64-percent majority of voters says it still feels like the country is in a recession. The good news is that’s far less than the 74 percent who felt that way a year ago, and the 86 percent who said that in 2010.

Worse, a recent Pew poll, shown at right, found that the economy — often the top concern — ranked second after terrorism. The basic job of government is to protect the people, but Obama’s indifference to national security must be shocking to many for terror to be their #1 priority for 2015.

The Pew survey took place over Jan 7-11, when the Charlie Hebdo jihad massacre occurred, including Obama stiffing the march of world leaders in Paris supporting freedom. He still refuses to name the enemy, perhaps because of his consistent fondness for Islam.

Last summer, the surge of Central American children across the Rio Grande showed that America’s southern border is a sieve. And if kids can get in with no problem, so can Allah’s murderers. Voters may wonder: How many Muslim sleeper cells are waiting to strike? And why does Washington continue to admit potential enemies (Muslims) as immigrants?

Another sign of unseriousness about national security has been Obama’s release of dangerous jihadists from Gitmo, a few at a time.

For a list of reasons, Americans don’t feel entirely safe, and the Pew poll reflects that belief.

As views of the economy improve and terrorist threats persist, the public’s policy priorities have changed: For the first time in five years, as many Americans cite defending the U.S. against terrorism (76%) as a top policy priority as say that about strengthening the nation’s economy (75%).

Since Barack Obama began his second term in January 2013, the economy has declined 11 points as a top priority, and improving the job situation has fallen 12 points (from 79% to 67%).

There has been little change over the past two years in the number saying that defending against terrorism should be a top priority; in fact, this has consistently been among the public’s leading policy goals since 2002. But it has moved to the top of the priorities list as the economy and jobs have fallen.