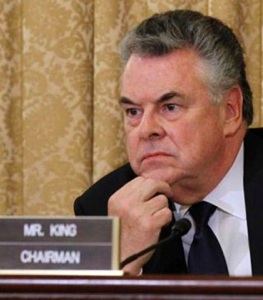 When Rep. Peter King held his three investigative hearings about hostile Islam, the squawking from the usual fifth-column suspects was loud and long. As Chairman of the House Homeland Security Committee, King’s inquiries pursued the threats that diverse Islamic unfriendlies pose for the nation now. But protecting national security didn’t sound like a good reason to enemies such as CAIR, which supports the terrorist Hamas group.

There’s bad news for the friends of jihad though: a recent poll showed that American citizens approve of King’s hearings. Bogus accusations of racism and/or Islamophobia from professional Islo-squawkers just aren’t working any more, looks like.

While New York Republican Rep. Peter King’s recent hearings on radicalization have sparked controversy among interest groups and in the media, a recent poll shows that a majority of Americans are supportive of his efforts.

According to a national poll of 1,000 likely voters conducted last month by Democratic pollster Pat Caddell and Republican pollster John McLaughlin for Secure America Now, 63 percent of Americans support the King hearings and believe “they need to continue because they are providing information which is valuable and important to stop terrorism in the United States.”

Twenty percent said the hearings should be discontinued because “they are offensive to Muslims and a waste of tax payer dollars.” Seventeen percent did not know, or refused to answer.

Rep. King welcomed the results, saying that they show his effort has broad support.

“The results of this poll demonstrate broad public support for the series of hearings that I convened in March to examine the ongoing and real threat of terrorist radicalization within the Muslim-American community,” King said, adding that the campaign to demonize him has not worked.

According to Rep. King, who has convened three hearing on the subject, the threat of radicalization is real and not something to be ignored.

“While the Council on American Islamic Relations (CAIR) and liberals in Washington and in the media have chosen to ignore the threat and have spent their time lambasting me for holding the hearings, it is clear that the majority of the American public have been thoughtfully paying attention to reality and understand that the threat of radicalization within the Muslim-American community is real and must be addressed.”

King has also taken his message abroad, testifying before the House of Commons in London last Tuesday.