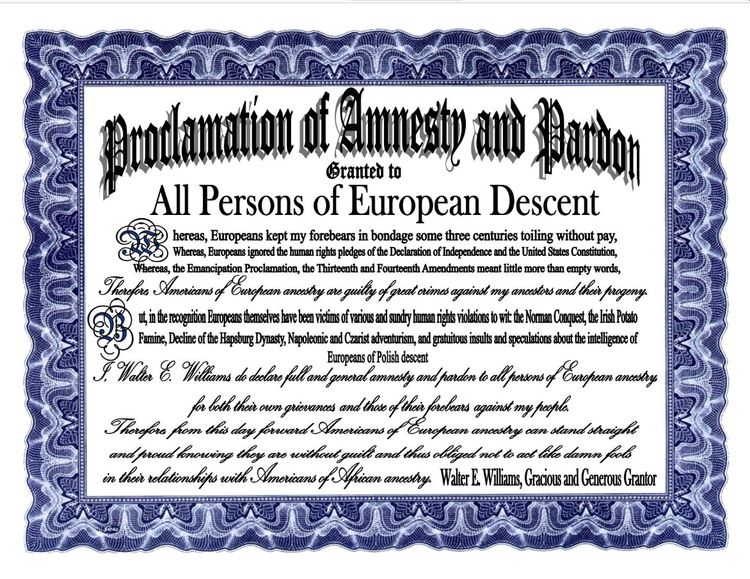 Via Kathy Shaidle, who's amazed that it's been published in a mainstream media publication like the Inquirer,

is the publisher of CommonConservative.com

There go my fellow conservatives, glumly shuffling along, depressed by the election aftermath. Not me. I'm virtually euphoric. Don't get me wrong. I'm not thrilled with America's flirtation with neosocialism. But there's a massive silver lining in the magical clouds that lofted Barack Obama to the presidency. For today, without a shred of intellectually legitimate opposition, I can loudly proclaim to America:

The Era of White Guilt is over.

This seemingly impossible event occurred because the vast majority of white Americans didn't give a fluff about skin color and enthusiastically pulled the voting lever for a black man. Not just any black man. A very liberal black man who spent his early career race-hustling banks, praying in a racist church for 20 years, and actively working with America-hating domestic terrorists. Yet white Americans made Barack Obama their leader. Therefore, as of Nov. 4, 2008, white guilt is dead.[More]

It would great if this were true, and it was discussed in an article here on VDARE.com, in which Jared Taylor was quoted as having told Jonathan Tilove:

"I think many smarter, far-thinking blacks are going to be worried that any time they start talking about discrimination, certainly institutional racism, people are going to say, 'Hey, look, you've got a black president for heaven's sake.'"

But it won't stop black activists and white liberals from trying. As for me, I was cured years ago, with the aid of a certificate from black free market economist Walter Williams:(Links added)

Whereas, Europeans kept my forebears in bondage some three centuries toiling without pay,

Whereas, Europeans ignored the human rights pledges of the Declaration of Independence and the United States Constitution,

Whereas, the Emancipation Proclamation, the Thirteenth and Fourteenth Amendments meant little more than empty words,

Therefore, Americans of European ancestry are guilty of great crimes against my ancestors and their progeny.

But, in the recognition Europeans themselves have been victims of various and sundry human rights violations to wit: the Norman Conquest, the Irish Potato Famine, Decline of the Hapsburg Dynasty, Napoleonic and Czarist adventurism, and gratuitous insults and speculations about the intelligence of Europeans of Polish descent,

I, Walter E. Williams, do declare full and general amnesty and pardon to all persons of European ancestry, for both their own grievances, and those of their forebears, against my people.

Therefore, from this day forward Americans of European ancestry can stand straight and proud knowing they are without guilt and thus obliged not to act like damn fools in their relationships with Americans of African ancestry.