Pew Hispanic has a new study out, and the gist is that not much has changed vis-a-vis the numbers of illegals in the country in the last couple years.

I'm not sure how much I believe that, given all the reports of Arizona border chaos of illegals continuing to cross in great numbers. Maybe some actually are leaving and the number even out.

But why isn't Washington doing more to chase out the job thieves during the worst employment depression since the 1930s? Obama promised he would go after employers, but the numbers don't reflect any worksite enforcement at all.

As the report notes on page 17:

There were 8 million unauthorized immigrants in the workforce in March 2010, down slightly from 2007, when there were 8.4 million. They represent 5.2% of the workforce, similar to their proportion for the past half-decade, when they represented 5% to 5.5% of workers.

You can read the full report: Unauthorized Immigrant Population: National and State Trends, 2010. 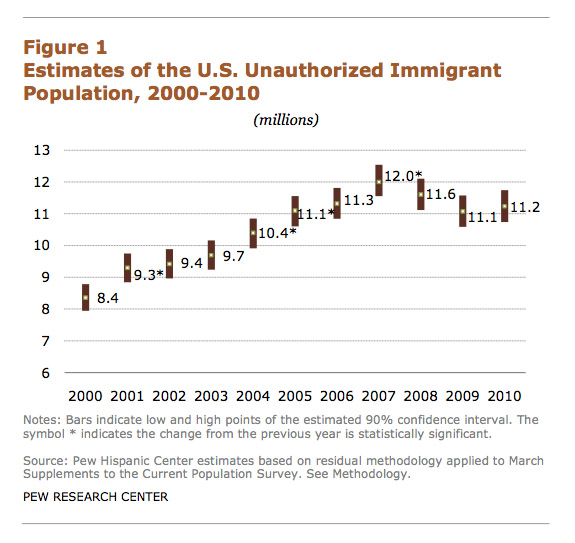 The Associated Press at least had some numbers, but 11 million illegal aliens may have become a yawner to the public by now.

After a dropoff during the recession, illegal immigrants seeking to sneak across the U.S. border may be ready to move again.

A new study released Tuesday finds the number of illegal immigrants living in the U.S. last year was roughly 11.2 million, a number virtually unchanged from 2009. In that year, the level of illegal immigration declined for the first time in two decades, dropping 8 percent from 2007, as a sour economy and stepped-up border enforcement made it harder or less desirable for undocumented workers to enter from Mexico. [. . .]

Steve A. Camarota, director of research at the Center for Immigration Studies, a Washington group that advocates tighter immigration policies, said it wasn't surprising that illegal immigration had stopped declining. He predicted the numbers will soon pick up, citing some improvement in the U.S. economy as well as the Obama administration's "promise of legalization to undocumented workers."

"There's no reason for these numbers to go down," Camarota said. "Our legal policy remains very permissive, and we're not enforcing the law."

_The states with the highest percentage of illegal immigrants were Nevada (7.2 percent), California (6.8 percent), Texas (6.7 percent) and New Jersey (6.2 percent).

_About 350,000 newborns last year had at least one illegal immigrant parent, representing 8 percent of all births. That share is largely unchanged from 2009.