Perquita Burgess And The Defenestration Of Bill O'Reilly: "A Very Plantational Remark"

While I'm trawling in my archives, I may as well give a mention to this column from February 2001: a modest, qualified appreciation of Bill O'Reilly, to whose show on Fox News I had become mildly addicted.

That was sixteen years ago. The addiction wore off; but I've checked in with the Big Mick from time to time, when eight o'clock comes around and I have nothing much else I feel like doing. It's easy watching and sometimes interesting. 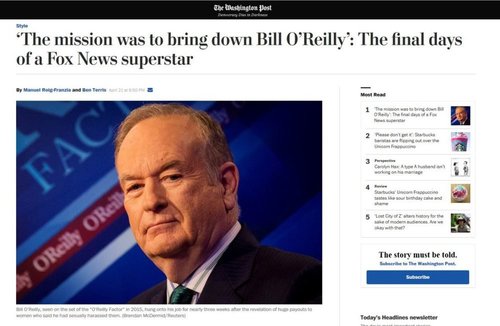 It was, I should say. As no doubt you all know by now, Fox News has dropped O'Reilly.

The cause of the dropping is given as sexual harassment on Bill's part towards female staffers. I've totally lost touch with what the phrase "sexual harassment" means nowadays, so I browsed some of the news stories.

Here's one of O'Reilly's accusers, Perquita Burgess, who was a temp at Fox News some years ago. How many years ago? Nobody seems to know, but it was some time prior to 2010.

Samples from Ms Burgess, as reported in the newspapers. Quote:

Three to four weeks after she was hired, they were on the elevator alone. She says he let her off the elevator first. As he was walking in front of her, he said, "Looking good there, girl," which was the first time he spoke to her.

Second quote. I should say that Ms Burgess is a mulatto, or possibly a quadroon. Quote:

Burgess claims that when she was eating lunch outside one day, O'Reilly saw her and said, "Hey, hot chocolate," as he walked past her without looking at her. She was "mortified," she told The View [that's some kind of TV program] and took it as a, quote, "very plantational remark."

Earlier this month the New York Times reported that Fox News and O'Reilly between them had paid out $13 million to various women accusers. That report prompted advertisers to pull out from O'Reilly's show, though his viewership actually increased.

What to make of all this? Color me skeptical. In the first place, if Perquita Burgess' stories are representative, Bill was no more than boorish, a thing women knew how to deal with when I was doing office work. Heck, they had a whole repertoire of ways to deal with it, ranging from the icy stare to a knee in the groin. Trust me on this.

What happened to "I am woman, hear me roar?" I thought women were supposed to be powerful and defiant nowadays, modeling themselves on the fearless little girl facing down the bull on the Wall Street traffic island. With Ms Burgess it's more a case of "I am woman, hear me whimper."

And the guy's 67 years old. Do younger Americans have any idea how tiresome it is, trying to keep up with social decorums that change week by week? I honestly did not know that saying "Looking good there, girl" to a female office colleague is insulting. How much time does Ms Burgess spend dressing and putting her makeup on in the morning in order to … look good? Next week I suppose a breezy "Good morning!" will count as sexual harassment.

Things seem to be headed in the same direction they've gone in Britain, where elderly gentlemen with distinguished careers in show business and the public service are humiliated and bankrupted because some neurotic female claims he put his hand on her knee back in 1973.

I don't know the truth about what Bill O'Reilly did, and neither do you. It looks to me, though, like a lawyers' ramp. Bill O'Reilly and Fox News have deep pockets. In the mental atmosphere of today, when there is no greater glory than to declare oneself a Victim-American, especially if your victimizer is a white male, and doubly especially if he is a conservative, this stuff will naturally come up, like crabgrass on a springtime lawn.

It goes without saying, of course, that the Social Justice Warriors hyperventilating about Bill O'Reilly complimenting some broad's looks, were cheering on a different Bill, Bill Clinton, when he was banging interns two at a time across the Oval Office desk. What lying hypocritical scum these people are!

Well, Bill's gone and I'll miss him … a little. He had a screen presence that not many TV presenters have. Something about the guy kept you watching. I've tuned in to the Factor a couple of times this week, when Dana Perino's been hosting. She's fine: speaks clearly, asks intelligent questions, doesn't embarrass herself. At the risk of ending up in the next prison cell to O'Reilly, I'll add that she's easy on the eye. And yet … no presence. After ten minutes watching I feel an irresistible urge to go hammer some nails into wood.

If some of the news reports are to be believed, what O'Reilly's defenstration actually represents is, an instance of Robert Conquest's Second Law of politics. Just to remind you, Conquest's three laws are:

Rupert Murdoch, the Fox News supremo, is 86 years old, and presumably just as tired as you or I will be at that age. His fortysomething sons, James and Lachlan, are both metropolitan sophisticates with trophy wives who are even more so. You can imagine how icky they find an older white guy like O'Reilly, with his neanderthal opinions and 1970-ish social habits. Eiuw!

Fox News is not, so far as I know, "explicitly and constitutionally right-wing." Conquest's Second Law therefore decrees that it will become left-wing, like the rest of the legacy media.

Tucker Carlson, watch your back.