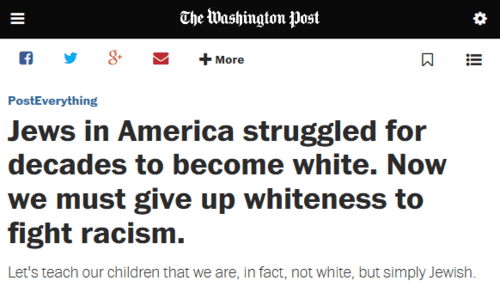 People Who Think They Are Not White: Rabbi Tells Jews to Cut Up Their White Privilege Cards

Individuals respond to incentives, so it’s not surprising to observe an ongoing Flight from White currently.

This is in contrast to the Flight Toward White in the mid-20th Century. For example, the Census Bureau didn’t separately count Hispanics / Latinos / Mexicans in the 1950 and 1960 Censuses in response to the League of United Latin American Citizens’ contention that it would be better for them to just be officially classified as white.

Now, of course, the Census Bureau laboriously classifies Hispanics as its own Ethnicity. (Nobody else gets an Ethnicity, just Hispanics.) This 1970-2010 Census ploy allows Latinos to get the benefits of affirmative action while also allowing individuals to assert their racial whiteness (because that means a lot to many Hispanics). In the future, it would not be surprising if the Census Bureau promotes Hispanics to their own race.

Other groups want in on the action, too. For example, Arab-American pressure groups are pushing the Census Bureau to count “Middle Eastern / North African” individuals separately from whites on the 2020 Census.

And now, from an op-ed in the Washington Post:

Jews in America struggled for decades to become white. Now we must give up whiteness to fight racism.

Let’s teach our children that we are, in fact, not white, but simply Jewish.

Gil Steinlauf is the senior rabbi at Adas Israel Congregation in Washington, D.C.

Steinlauf is a modestly influential rabbi from a mid-range point on the spectrum. Here’s a 2014 article in The Atlantic by the Atlantic’s well-known ethnocentrist correspondent Jeffrey Goldberg:

When Your Rabbi Comes Out as Gay

Or, we live in remarkable times

A few days ago, I posted a piece about my rabbi, Gil Steinlauf, the senior rabbi of Adas Israel Congregation in Washington, D.C., the largest Conservative movement-affiliated synagogue in the nation’s capital. The post concerned an excellent Rosh Hashanah sermon he had delivered about Israel and Hamas.

It turns out that there was a lot more on Rabbi Steinlauf’s mind during the High Holidays than just the Middle East. This afternoon, he e-mailed his thousands of congregants to announce that he and his wife, Batya, a respected rabbi in her own right, were getting divorced, because he has come to the realization that he is gay.

There is sadness here, of course, because Gil and Batya have had, in many ways, a good, even model, marriage (their three children are testament to this), but there is also relief, and anxiety, and most of all a leap into the unknown.

At the start of a new year, Jews in America should consider their place in our country’s racist social constructs.

This summer, I had a conversation with a young woman about her Jewish identity. She told me how she grew up in a family that was very involved in her synagogue. She went to Jewish day school. She had been to Israel multiple times. But she felt very far from her Jewishness. She simply couldn’t find the relevance of Judaism as she was making her way on her own in the world. I asked her what she did feel passionate about. She told me she has been reading and thinking a lot about racial justice. What moved her was the #BlackLivesMatter movement — how, in light of Ferguson, Charleston and seemingly endless incidents of injustice against black people in our society, she felt a need to grapple with the racism that is so pervasive in this country and how it affects her identity.

“As a white woman,” she said, “as the product of so much white privilege, it makes me all the more angry to see how other white people so blindly and carelessly feed into the racial climate of our society.” “So the fact that you are white makes this issue all the more painful, all the more personal for you?” I asked. “Yes,” she said.

I certainly identified with her angst. I find the reality of American racism unbearable: the legacy of slavery; the institutional discrimination that is so pervasive; the scourge of mass incarceration of black Americans, with its collateral damage on families; the ongoing blight of housing segregation; the role of law enforcement in furthering racist systems and hierarchies; all this, and so much more. My answer to her, and my answer for all American Jews during these Days of Awe, is that finding our true Jewish identity can begin by questioning our whiteness.

In a flawed and racist society, we Jewish Americans are prospering, reaching the top echelons of privilege and power. With racism and injustice entrenched year after year, generation after generation, we must now ask ourselves: What role do we play in that injustice now that most of us live as white people in America? We must cease to consider ourselves to be part of the social construct of whiteness, despite all the white privilege that America affords us, privilege that eluded many of our parents and grandparents. Starting in this new year of 5776, we must teach our children that we are, in fact, not white, but simply Jewish.

The great blessing and promise of America to our ancestors was that it was a land of opportunity, where we are all recognized as equal, where nothing, not even the heavens, is beyond our reach. We all know that the saga of Jews in America is a stunning success story. Our success here is built on the efforts of the first generations of American Jews who struggled mightily to assimilate — to slough off the ways of the old country, to out-American the Americans. In many ways, today it’s difficult for us to appreciate how remarkable this success is.

Well into the 20th century, we Jews were barred from the whitest country clubs.

Have I ever mentioned that obsessing over country clubs is like … a Thing?

We couldn’t buy houses in the whitest neighborhoods.

I grew up on the wrong side of the hills from a neighborhood called Beverly Hills, so I guess that gives me a bizarre, offbeat perspective on what America was like in the past because who else ever heard of a place called “Beverly Hills?”

Even today, some of us remember being called anti-Semitic names, having pennies thrown at us or being beaten up because we are Jewish. But that young woman I spoke with this summer, and most of her young adult Jewish peers today, can hardly fathom being singled out, being treated as “other,” because of their Jewishness. And the main reason why anti-Semitism is no longer mainstream in our society is because sometime in the last half century, we convinced America that we, too, are white.

Who can forget how Confederate Secretary of State Judah P. Benjamin was unmasked as Jewish in 1863 and instantly sold into slavery? And of course there were those shocking incidents in apartheid South Africa when it was discovered that the ownership of the De Beers diamond monopoly wasn’t white. And there was the complete box office flop in 1927 of the first talkie, The Jazz Singer, because its star, Al Jolson, wasn’t white. Remember how Queen Victoria told Disraeli, “You’d be my favorite Prime Minister, except you aren’t white”?

All those years of singular focus on making it in America paid off!

These days, the country clubs and exclusive neighborhoods are as Jewish as they are WASPy.

… The brilliance of being Jewish, though, is that we stubbornly refuse to fit into any social construct of power or oppression. We are simply Ivri’im, people from “somewhere else,” people who struggle with God and justice, who demand that the rest of the world does, too, and see every human life as sacred because we are all in the image of God. And the truth is, we have never belonged to one race alone. The Torah tells us that we left Egypt with the “erev rav,” with a mixed multitude of peoples. Around the world there are Jews of color, Asian Jews, Jews of all kinds. The idea that Jews are white is not only ridiculous, it’s offensive to who we really are!