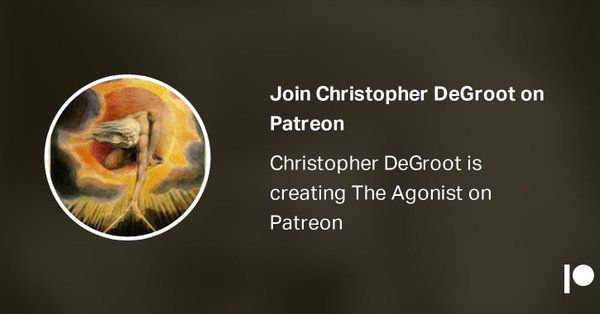 Paul Gottfried On THE AGONIST: A Unique New Publication

Christopher DeGroot has launched a web journal, The Agonist, and those who have read this diverse writer at Taki’s Magazine and elsewhere probably won’t be surprised by the publication’s contrarian philosophy and spirit. One meaning of agonist is “one who is engaged in a struggle,” and The Agonist, where I’m a contributing editor, is battling political correctness and other prejudices that have enslaved our culture. Elegantly designed, the journal publishes essays, book reviews, short fiction, poetry, and other literary works. Despite the shoestring budget, there have been three rich and vigorous issues so far this year for the new quarterly.

Readers can sense The Agonist’s range, heterogeneity, and willingness to take risks from essays such as contributing editor Scott Beauchamp’s “Basic Bitch Hayek,” Jack Kerwick’s “Christianity’s Divine Hatred,” Ben Sixsmith’s “Joseph Conrad, Between Poland and Britain,” Michael Millerman’s “The Academy, Mainstream Conservatism, and the Dissident Right,” Jacob Phillips’ “Bards Reborn,” William Boyd’s “Leftist Ideology and the Corruption of the American Military,” and from my polemics against Conservatism, Inc., including my most recent, “Understanding the Phony American Right.”

I would also recommend the quarterly’s eccentric satires, e.g. : “The Voodoo of the Suit,” by Ngulays Hülssendorff, “Intertemporal Cuckoldry: The Rational Choice of Post-College Social Life,” by James McCarthy, and “The Crèche-City of Tel Poriyut,” by Ramon Glazov.

Although Christopher earns his living as a journalist, his training is in literature, and so his journal has published a number of distinguished poets: e.g., Joseph S. Salemi, Catharine Savage Brosman, James Matthew Wilson, Sally Thomas. When the editor visited me recently in Elizabethtown, Pennsylvania, he lamented the corruption of literature and gave that as a big reason for creating The Agonist. Like colleges and universities, literary magazines and the publishing industry play the identity politics game, and allow this to substitute for intellectual and aesthetic standards. In the current issue of The Agonist one finds three politically incorrect satirical poems: contributing editor Anthony Esolen’s “The Contemporary Catholic Examines His Conscience,” Brooke Clark’s “The Feminist Eunuch,” and Christopher’s “Nimrod Reitman’s Love Poem to Avital Ronell.” Needless to say, though these poems are well wrought and quite funny, they would not likely pass the ideological standards of National Review, let alone those of The Nation.

Funding represents a challenge for a publication that’s not pushing some popular agenda or ideology, say, the views of the Cultural Left or those of Conservatism, Inc. In any case, Christopher’s web journal is fighting a good and independent fight in the culture war, and to that end, the editors would appreciate donations.