The West epitomizes individualistic, do-your-own thing cultures, ones where the rights of the individual equal and often trump those of the group and where differences are valued. East Asian societies exalt the larger society: behavior is constrained by social roles, conformity is prized, outsiders shunned. "The individualist-collectivist split is one of the most powerful differences among cultures," says [Richard] Nisbett [author of The Geography of Thought]. But the reason a society falls where it does on the individualism-collectivism spectrum has been pretty much a mystery. Now a team of researchers has come up with a surprising explanation: disease-causing microbes. Societies that evolved in places with an abundance of pathogens, they argue, had to adopt behaviors that add up to collectivism, for reasons of sheer preservation. Societies that arose in places with fewer pathogens had the luxury of individualism, which is less effective at limiting the spread of disease but brings with it other social benefits, such as innovation.

The scientists started with the fact that certain behaviors make you less likely to contract an infectious disease. A reluctance to interact with strangers can protect against pathogens because strangers are more likely to carry strange microbes that the group lacks immunity to, says Mark Schaller of the University of British Columbia; xenophobia keeps away strangers and their strange bugs. Respect for traditions also works: ways of preparing food (using hot pepper, say, which kills microbes), rules about hygiene and laws about marriage (wed only in-group members, whose microbes you're probably immune to) likely arose to keep pathogens at bay. "Conformity helps maintain these buffers against disease," says Corey Fincher of the University of New Mexico; mavericks are dangerous. In places with a high prevalence of pathogens, such cultural traits–which happen to be the hallmarks of societies that value the group over the individual–would be adaptive. Put another way, societies that arose in pathogen-rife regions and did not have such traits would be wiped out by disease. Societies that did have them would survive.

When the scientists examined how closely collectivism tracked the prevalence of pathogens, they found a strong correlation, they will report in Proceedings of the Royal Society B. In general, tropical regions have more pathogens, and societies there tend to be more group-oriented than those at higher latitudes. Ecuador, Panama, Pakistan, India, China and Japan are the world's most group-first societies–and historically have had the highest prevalence of natural pathogens due to their climate and topography. The most individualistic are in Northern Europe and the United States, where there have historically been fewer native pathogens. For years scientists have scratched their heads over why collectivism declines with distance from the equator, and why living in colder regions should promote individualism (you'd think polar people would want to huddle together more). The answer seems to be that equatorial regions breed more pathogens.

How might pathogen-fighting customs and attitudes arise, or fail to? Maybe people make conscious efforts to act in ways that inhibit the spread of pathogens, such as by shunning strangers and demanding conformity. Or maybe there are genes for behaviors that, at the level of a whole society, manifest themselves as collectivism or individualism, and genes for individualism get wiped out in disease-plagued regions. But when East Asians move to the West or Westerners go East, says Nisbett, they begin to see, think and behave like people in their adopted society. That would be hard to do if they were in the grip of collectivist or individualistic genes.

The presence of pathogens also predicts cross-cultural differences in personality traits, not just shared cultural values. "In places that have historically had a lot of diseases, people generally score lower on measures of extraversion and 'openness,' which is jargon for curiosity and related traits," Schaller says. "Our history of living with infectious diseases may have shaped, in ways we're not even aware of, human cognition, behavior and culture." To trace all that back to the environment may seem a step too far. But the physical world has shaped skin color and other superficial features. The next frontier is fathoming how it might have shaped our very thoughts and values.

Here's the PDF of Schaller's paper.

I think pathogens are extremely important — for example, John Reader argues that that may be why there were so few urban centers in sub-Saharan Africa until recently: too many epidemics, so people had to spread out fairly evenly across the land in little villages — but I'm not sure at all about whether this individualism - collectivism axis fits the data. 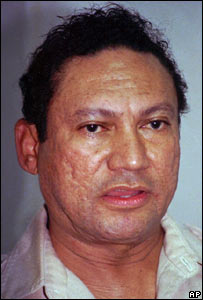 I'm dubious of pronouncements like: "Ecuador, Panama, Pakistan, India, China and Japan are the world's most group-first societies..." Exactly how does Japan resemble Panama? (Here's a picture of a prominent Panamanian.)

Perhaps Panamanians and Japanese answer psychological quizzes similarly, but they don't seem to behave similarly. Has anybody made up a testable list of how much people in different countries behave in the collective good? For example, do they not litter? Do they return dropped wallets? Do they expect provide good service without tips? The Japanese would typically score well on many such measures, as would the Swedes. Scandinavia is a low-pathogen place. Japan, judging from its temperate latitude would be a moderate pathogen place, except that the Japanese are so clean that they've managed to crowd a lot of people together.

Let's consider within-region differences, which are easier to wrap our heads around than global comparisons of the Who's more individualistic: Who's more individualistic and less collectivist: the residents of Stockholm or the residents of Naples? And who has been in more danger from pathogens? Naples, right? Indeed, the residents of Naples are so uncollectivist that over the past year, they haven't been able to get their collective act together long enough to routinely collect the garbage, so they are in increasing danger from pathogen-borne epidemics.

What about just within China? Which region is more economically entrepreneurial: north or south? The south, which of course has a larger pathogen burden — indeed, that's where so many forms of flu originate.

In summary, I think pathogens are very important, but I don't see much of a link to individualism-collectivism, which may be too large and hazy a generalization to work with.

Update:More on pathogens and personality