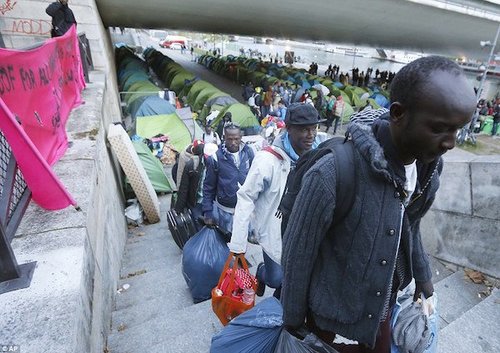 On Thursday, French authorities dismantled two long-standing squatter camps and put the residents on buses for government-approved temporary housing where they can apply for asylum. The policy is a pathetic response to a third-world invasion of illegal aliens looking for handouts. Merely moving the invaders around and planning on plugging them in to the social services system is more misguided liberalism.

Europe is allowing foreign lawlessness to gain footholds and expand. Newbie illegal aliens arrive and pitch tents under a bridge. More established foreigners create neighborhoods hostile to outsiders, known as no-go zones where police fear to tread. The exist in France and Germany. A couple years ago, France considered designating the entire city of Marseilles a no-go zone. It’s no way to run a country, where foreigners can invade and set up mini-states within. With continued immigration and polygamy-aided high birth rates, the hostile zones will expand and squeeze the native population.

The video following reports that some of the squatters have lived in the camp for two years.

The Local reports that the moochers will be moved to a “designated centre” for a month and after that, who knows? Perhaps many will move along to coastal Calais, a stopping-off place on the way to Britain and its generous welfare programs.

Police and local officials evacuated two refugee camps in Paris early on Thursday as France comes under pressure to do more for the thousands of migrants living in squalid conditions.

The clear out began at around 6am when police joined by social services and aid workers moved in to the camps that had sprung up at Gare d’Austerlitz and outside the Town Hall of the 18th arrondissement.

In all around 500 refugees and migrants have been moved out with the Paris officials promising that they will be guaranteed a place to stay in a designated centre for at least one month.

Around 20 buses were laid on to take the refugees to the various lodgings in and around the Paris region.

The French government has been criticised recently for offering a two speed service to refugees, with new arrivals granted lodging, warm meals and help with the asylum process, while those who have been living for months in camps in Paris, Calais and along the north coast, have been left to fend for themselves.

“It would be abhorrent to say those who arrive will be dealt with quickly and the others we’ll leave outside. I want to reassure them,” said Hidalgo.

Many of the migrants were only too pleased to leave the tents behind them and some had prepared their baggage in advance.

Most of those living in the camps in Paris are said to be Sudanese and Eritrean, with most using the camps as stop off points on the way to Calais, from where they hope to get to the UK.

Pascal Brice, head of OPFRA, the organisation that deals with asylum applications in France, was at the Austerlitz camp on Thursday.

He spoke to the migrants telling them that: “Buses will take you to accommodation around the Paris region where you will be welcomed with dignity. You will be given food and officials will deal with you individually.”

There have been calls for France to house migrants and refugees in some of the 77,000 social housing flats that remain empty.

The HLM, as they are know in France, are mainly in small towns around the country where there is littler demand, but supporters of the idea say it would offer a long term solution.