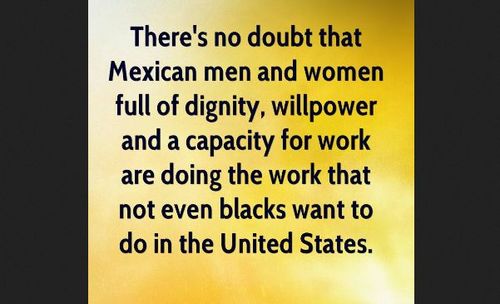 Mexican Movie Shows President Of Mexico Telling US Ambassador That "Mexicans Are Better Than Blacks Almost In Everything.”"

Here’s a transcript of the heart (from 0:49 to 2:16) of this high level discussion at the National Palace in Mexico City:

President of Mexico [to American Ambassador]: “First of all, and as you may know, we actually have many problems in Mexico. The most important are the economic ones: crisis, inflation, unemployment, social instability, and the violence originated by the organized crime. But I want to inform you that we are working very hard on these subjects. [Getting to the point] If you opened your border to all my fellows countrymen, we can do all kinds of jobs even the black people don’t wanted to do.”

American Ambassador: “Eh … I beg your pardon, Mr. President, I’m not quite sure I understand what you’re saying?”

President of Mexico: “I’ll make it clear for you, Ambassador, my government has a very interesting propulsion …”

President: “Proposition to your President.”

President: “That we, the Mexicans, we are waiting to do all the dirty jobs not even the Negros wanted to do. Actually, the Mexicans are better than blacks almost in everything.”

Ambassador: “Yes, well, I will report this news to President Obama and I’m sure he’ll be pleased at your offer.”

This is the opening scene from La Dictadura Perfecta, or “The Perfect Dictatorship,” a term for the Mexican government coined by Peruvian novelist Mario Vargas Llosa.

After this scene, the film turns into a multi-Wag the Dog story as the President orders the monopoly television network to redirect attention from his embarrassment to a financial scandal involving a corrupt state governor (Damián Alcázar). In turn, the network executives offer the beleaguered governor their premium image management services.

You can watch the movie (with English subtitles or dubbed into English, your choice) on Netflix.