Nothing says celebration to Muslims more than a mass attack on infidels, particularly Christians. The city of Lahore recently experienced hundreds of Muslims burning down Christian homes because there was a rumor that someone spoke ill of the precious prophet. Supposedly the Muslims were angry about the alleged insult, but the photos show a happy horde who clearly enjoyed destroying the homes and property of Christians. 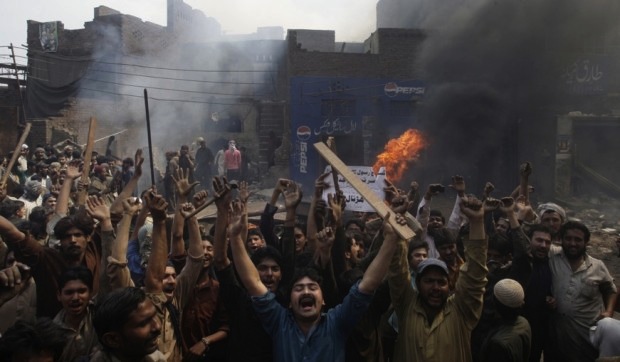 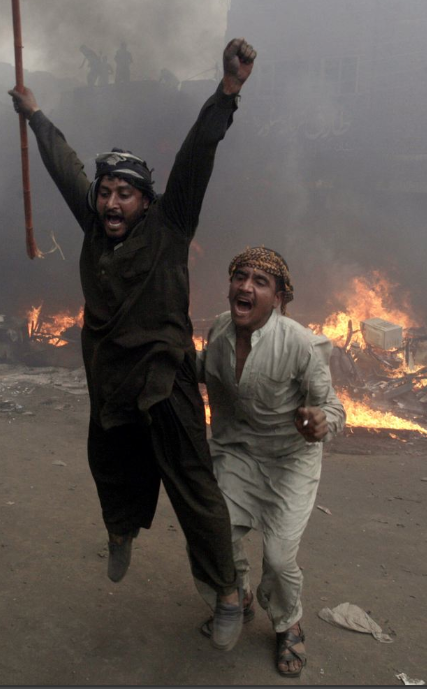 Washington continues to pipe billions of dollars to unfriendly Pakistan, which regards America as an enemy and behaves abominably in many ways. It still imprisons Dr. Shakeel Afridi, who helped the CIA located Osama bin Laden in the Pak town of Abbottabad. Pakistan also refuses to take back its citizens who have committed crimes in this country and our government want to deport.

America is home to 307,855 Pakistan-born persons, according to a 2011 accounting, most of whom are presumably Muslims. Some of them have already gone jihad, including the bomb-plotting Qazi brothers, wife-beheader Muzzammil Hassan, Times Square attempted bomber Faisal Shahzad, and the Hayat family of Lodi, to name a few.

Of course, not all Pakistani immigrants are jihadists or even support a worldwide caliphate, but it is culturally naive for our government to base its immigration policy on the idea that all diversity is equal.

LAHORE, Pakistan (AP) — Hundreds of people in eastern Pakistan rampaged through a Christian neighborhood Saturday, torching dozens of homes after hearing reports that a Christian man had committed blasphemy against Islam’s prophet.

Blasphemy is a serious crime in Pakistan that can carry the death penalty but sometimes outraged residents exact their own retribution for perceived insults of Islam’s Prophet Muhammad. Pakistan is overwhelmingly Sunni Muslim and people of other faiths, including the nation’s small Christian community, are often viewed with suspicion.

The incident started Friday when a young Muslim man accused a Christian man of committing blasphemy by making offensive comments about the prophet, according to Multan Khan, a senior police officer in Lahore.

A large crowd from a nearby mosque went to the Christian man’s home on Friday night, said Khan. Police registered a blasphemy case against the man after the crowd gathered and demanded action, the officer said.

Fearing for their safety, hundreds of Christian families fled the area overnight.

Khan said the mob returned on Saturday and began ransacking Christian homes and setting them ablaze. He said no one in the Christian community was hurt, but several policemen were injured when they were hit with stones as they tried to keep the crowd from storming the area.

But Akram Gill, a local bishop in the Lahore Christian community said the incident had more to do with personal enmity between two men — one Christian and one Muslim — than blasphemy. He said the men got into a brawl after drinking late one night, and in the morning the Muslim man made up the blasphemy story as payback.

He said the Christian community handed over to police the accused man, identified by police and Gill as Sawan Masih, when police came to the neighborhood to investigate. Then the Christians all locked up their houses and went to relatives in other areas. He said the mob was armed with hammers and steel rods and broke into houses, ransacked two churches and burned Bibles and crosses.

“Poor people were living here. They have lost all of their belongings,” he said. “Where can they go now?”

The scene was chaotic. An Associated Press reporter said roughly 150 homes were torched. One man was seen carrying a dog and some puppies from a burning house. Refrigerators, washing and sewing machines, cooking pots, beds and other household goods were ripped from homes, smashed and burned in the streets.

One Christian couple from the neighborhood said they went to their Muslim neighbors’ house on Friday night after people came looking for the Christian man accused of blasphemy. Ishaq Masih said the Muslim neighbors sheltered the couple for the night and then gave them money to leave the area in the morning.

After the mob dissipated, residents began to slowly return to their burned-out homes.

“They have burnt each and every thing in my whole house. Nothing is left here. I don’t know why this happened,” said Samina Riaz. “Now we don’t have even enough to eat.”

Such accusations of blasphemy in Pakistan can prompt huge crowds to take the law into their own hands. Once an accusation is made it’s extremely difficult to get it reversed, partly because law enforcement officials do not want to be seen as being soft on blasphemers.

Two prominent politicians were assassinated in 2011 for urging reform of the law. The killer of one of the politicians was hailed as a hero, and lawyers at his legal appearances showered him with rose petals.

According to Human Rights Watch, there are at least 16 people on death row for blasphemy and another 20 are serving life sentences.

Last year there was a rare reversal of a blasphemy case. A teenage Christian girl with suspected mental disabilities was accused of burning pages of the Quran. But she was later released after a huge domestic and international outcry about her treatment. A local cleric where she lived was arrested and accused of planting the pages in her bag to incriminate her, a rare example of the accuser facing legal consequences. However, he was later freed on bail.

While Muslims are frequently accused of blasphemy, members of Pakistan’s small Christian community are especially vulnerable to the accusations, said the head of the Human Rights Commission of Pakistan, Zora Yusuf. Only in Christian cases will violent mobs punish the entire community for the perceived crime of one Christian.

She said often these blasphemy cases are personal grudges or disputes masquerading as religious fervor.

“Most of the time there are other motives involved,” she said, such as scaring off Christian residents to grab their property.

The chief minister of Punjab province, Shahbaz Sharif, quickly condemned the incident and said investigators will use video footage of the rampage to identify the guilty and make arrests. He also said he was removing a number of high-ranking police officers.

But the Punjab government has frequently been criticized by human rights groups for essentially tolerating the type of religious extremism that often leads to this type of violence and the Sunni Muslim extremists who often whip up anti-minority sentiment.

“The Punjab provincial government has spent almost its entire 5-year term in office being in denial about threats to minorities,” said Ali Dayan Hasan, Pakistan director of Human Rights watch in a statement.

Also on Saturday, four people were killed and 25 were wounded when a bomb exploded inside a mosque of the Sunni Barelvi sect in the northwestern city of Peshawar. The bomb was planted in a bookshelf inside the mosque and was detonated by remote control when noon prayers started, said senior police officer Imtiaz Khan.

Peshawar, the capital of Khyber Pakhtunkhwa province, has been the site of several terrorist attacks in recent months. The city is surrounded by lawless tribal regions where al-Qaeda and Pakistani Taliban have hideouts.