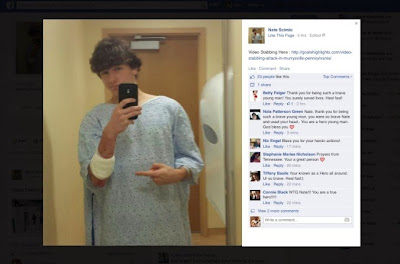 I was at the doctor's office in Far Rockaway all yesterday morning, from 8:52 on. They had a big-screen TV set to CNN, with Carol Costello officiating. It was cable news SOP: 'We know next to nothing, but we are going to keep repeating our ignorance on endless loop.' At one point, Costello had the obligatory "expert" on: He opined that that the attacker "might have mental health issues."

Oh, he might be crazy? For that you need an expert? I had a good laugh with that one, with the other waiting patients.

A couple walks away from the school crime scene

Five Questions About Alex Hribal and the Pennsylvania School Stabbings

The frenzy lasted only five minutes, but the rumors and speculation swirled for hours. A student in a quiet suburb of Pittsburgh rampaged through his high school and brutally stabbed his schoolmates. Students saw blood everywhere, but authorities were quick to praise the heroes at the school who averted what could have been an even greater tragedy.

Not much is known about the 16-year-old boy who's charged with the school attack, but these are among the biggest questions:

What Led to the Spree?

Alex Hribal's father wouldn't comment when he was met by reporters outside his home Wednesday in Murrysville, and authorities say it's too early in the investigation to have any solid clues.

Classmates at Franklin Regional Senior High School said Hribal didn't seem like the type to turn violent. He had friends, he got good grades and he wasn't bullied, they said. No inflammatory or troubling social media posts surfaced in the hours after the attack — investigators said that as far as they knew, he didn't have a cellphone.

But at Hribal's arraignment Wednesday, prosecutors hinted that he might have mental problems, saying he indicated at the scene of the stabbings that he "wanted to die" and telling the judge that he might not be competent to stand trial. 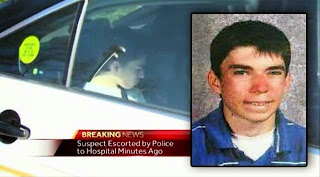 Initial reports from a chaotic scene are always contradictory. Wednesday, the number of people reported to have been injured ranged from as few as 19 to as many as 26 — the best even the police chief could say a few hours afterward was "about 20."

The criminal complaint against Hribal charges him with stabbing or slashing 21 people — 20 classmates and a uniformed security guard. No other victims are mentioned. Authorities and witnesses described a scene of widespread panic as students fled into the paths of teachers, administrators and security officers rushing to the scene — any other injuries were likely suffered in the melee.

How Safe Is the School?

Reports of violent incidents at the school are few — it's in a city with a lower-than-average crime rate. It's rated among the 50 top-performing public high schools in Pennsylvania, with 98 percent of its students graduating — an unusually high rate.

The school doesn't have metal detectors, which might have flagged the knives. Pennsylvania Gov. Tom Corbett said he was reluctant to put metal detectors in all schools because of what it would "say about our community."

How Was He Stopped?

According to the criminal complaint against Hribal, Assistant Principal Sam King tackled the boy onto the floor, where Murrysville police Officer William "Buzz" Yakshe, a school resource officer, handcuffed him.

The entire incident lasted only about five minutes. Authorities said the quick response was partly due to the fact that the attack occurred shortly after 7 a.m. — during the changeover of security, when officers from both the overnight and the day shifts were on the campus.

The carnage also may have been limited because at some point, the school's fire alarm was pulled. Murrysville Police Chief

Tom Seefeld said that "probably assisted with evacuating the school." 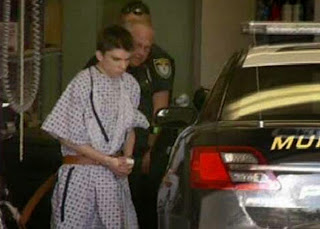 Suspect Alex Hribal at the hospital in a hospital gown

Local, state and federal investigators are poring over three computers taken from Hribal's home and are interviewing the victims and hundreds of potential witnesses. What they uncover could be revealed April 30, when Hribal is due back in court. Meanwhile, he remains in a juvenile detention facility without bond on four felony counts of attempted homicide, 20 felony counts of aggravated assault and a misdemeanor weapons-possession charge.

Given the questions prosecutors raised about Hribal's competence for trial, he is likely to be examined by one or more court-appointed psychiatrists or psychologists — something his lawyers requested. Typically when the state conducts such examinations, specialists hired by the defense also examine the suspect.

M. Alex Johnson is a senior writer for NBC News covering general news, with an emphasis on explanatory journalism and data analysis. Johnson joined NBCNews.com in January 2000 from The Washington Post, where he was news editor of washingtonpost.com and night city editor of the print edition. He has also worked at the Knight-Ridder Washington bureau, Congressional Quarterly and The Charlotte Observer, where he was part of a team that won the 1987 Pulitzer Gold Medal for Public Service. He is a member of the National Press Club, Investigative Reporters and Editors and the Online News Association.