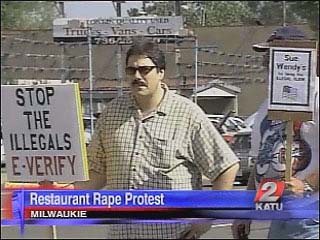 Congrats to the folks at Oregonians for Immigration Reform for connecting the dots between a crime and the lack of workplace enforcement, particularly checking the status of workers.

MILWAUKIE, Ore. - Police are looking into a rape at a Milwaukie Wendy’s where the alleged attacker, a Wendy's employee, is believed to be in the United States illegally.

The restaurant owner says he checked out the employee's work documents when he was hired and they looked legitimate.

Now, some lawmakers and immigration reform supporters say want more than that level of effort from business owners as well as legal changes for immigration enforcement.

They not only want the laws changed, but they immediately want the owner of the Wendy’s to start using the electronic "e-verify" identification system to check the immigration status of employees.

Protesters outside the restaurant Friday are encouragingÂ customers not to even enter the business until the owner agrees to screen his workers.

The group behind the protest is Oregonians for Immigration Reform.

Protesters were handing out fliers to customers telling them about the rape that reportedly happened in the Wendy's bathroom.

In addition, Accused Wendy's Rapist Has Prior Arrests

Evanivaldo Alejo-Sebastian was arrested twice before — once in 2006 and once in 2007 — in the Kansas City area.

The protesters make a good point: E-verify not only thwarts illegal alien job thieves but its universal and mandatory use would make workplaces safer.

Offhand I can think of a couple of murders where an illegal alien became acquainted with his victim on the job. One terrible example was college freshman Jenny Garcia who was knifed to death in her own home by David Diaz Morales, a man arrested for child molestation who nevertheless worked at the same restaurant as Garcia in sanctuary city Austin.

Another was a young mother, Vinessa Hoera, who rejected the amorous workplace advances of Guatemalan alien Faustino Chavez who eventually raped her and slashed her throat numerous times in Suffolk County New York.