It’s nice to see patriotic Americans come out in respectable numbers to inform a contingent of the Soldiers of Allah that their presence is not welcome here.

The event in question was a Sunday fund-raiser in Yorba Linda for some benign-sounding Islo-charity, which have been used for jihadist purposes in the past. The speakers included dodgy characters Siraj Wahhaj (an unindicted co-conspirator in the 1993 World Trade Center bombing but never brought to trial) and Imam Amir Abdel Malik Ali (an Oakland cleric who is a popular campus speaker among radical Muslims for his incendiary remarks).

If the fund-raiser was indeed a gathering of mellow Muslims for non-hostile purposes, then why were the speakers so unsavory? Just repeating the phrase ”Islam is a religion of peace” doesn’t convince people any more with so much evidence to the contrary on the table.

Another cultural note: It’s tragic to see British has become synonymous with cowardly surrender monkeys, and rightly so, as an American declares in the article below. A few decades ago they courageously stood alone against Nazi attacks, but now the tribe of Britain has been reduced to censoring their own society for any possible British behavior that might cause offense to hostile Muslim immigrants. A truly Stalinist level of political correctness has taken hold and is choking the traditional values to death, such as music appreciation, equality under law, fondness for dogs.

Interesting touch that somebody brought their dog to the anti-sharia protest in Orange County (below). Muslims hate dogs and believe they are unclean. More photos from the event can be seen at the Orange County Register. 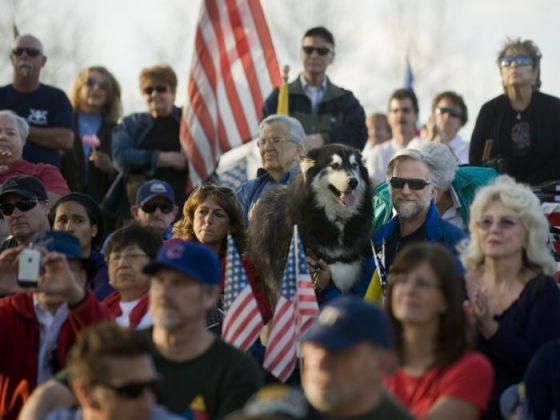 In addition, one of my favorite congressmen, Ed Royce, appeared briefly and noted that Wahhaj supports Sharia and the stoning of women. And Wahhaj is an American-born convert. Imagine what the born-there characters believe.

The protesters are upset over the speakers who headlined an event at the Yorba Linda Community Center. Spokesman Waqas Syed said the Islamic Circle of North America is raising money to fight homelessness and abuse, and the speakers were only invited to talk about their charity work.

Brooklyn-based Imam Siraj Wahhaj was once named as a co-conspirator in the 1993 World Trade Center bombing, but he was never charged.

”He has said specifically he is in favor of Sharia law and stoning of women,” said Rep. Ed. Royce.

”They may have views which may or may not be political and which we may or may not agree with,” Syed said. ”There is absolutely no basis to the fact that we are connected with any of the terrorist organizations.”

But hundreds of protesters don’t buy Syed’s explanation and staged a rally they say was both patriotic and religious. Some protesters even played the shofar, which is usually sounded on the Jewish high holy days.

”It’s also used in battle to announce to the enemy that God’s army is coming,” said Dena Newman of San Dimas.

The crowd screamed things like, ”Go home you terrorists” at those entering the Yorba Linda Community Center.

”As an American citizen, it is hurtful. I’m being told to go back home. I’m actually from Fullerton, so I don’t know where back home is for me. Back home is Fullerton,” said Adel Syed of Fullerton.

Many protesters argued that First Amendment rights only go so far.

It’s unfortunate that Washington forces Americans to take to the streets in protest of a dangerous tribe. The federal government is behaving irresponsibly by allowing Muslim immigration to continue and increase when the threat has become more clear with the uptick of terror attacks during the Obama administration.

What benefit is there to welcoming a historic enemy of 1400 years standing? None whatsoever.