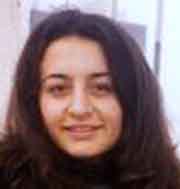 Diversity is getting worse for young Muslim women in Britain, as Islamic daddies apparently feel they can get away with more sharia-type behavior such as killing independent daughters (e.g. Tulay Goren, pictured).

Or perhaps the authorities are waking up to what was there all along, but was hidden by media and elite praise for the wonderful diversity enriching the country as a result of Muslim immigration.

The number of murders, rapes and assaults on people who dare to break strict religious or cultural rules is doubling every year, police figures show, with up to two violent "honour crimes" being committed every day.

But charities which help victims of honour crimes say the true extent of the problem is far worse than the statistics show, as every year hundreds of victims - normally women - are too frightened to report attacks or to give evidence in court.

The escalating problem was highlighted yesterday as an Old Bailey jury convicted Mehmet Goren, 49, of the cold-blooded and premeditated murder of his 15-year-old daughter Tulay after she fell in love with someone from the "wrong" branch of Islam.

Miss Goren disappeared 10 years ago after telling a friend she might be pregnant but justice caught up with her father after his wife "courageously" testified against him and lifted what was described as the "cloak of secrecy" which surrounds honour crimes.

A prosecutor said the case was a "wake-up call" to the authorities over the extent of the problem in this country, which campaigners say is growing because of the rise of religious fundamentalism.

Actually, it's Muslim immigration that's growing, not so much "fundamentalism" (all of Islam, if you read the Koran carefully). There are now 2.4 million Muslims residing in Britain, which they say is "nice" to them, though "submissive" would be a better description.

America has already experienced several honor killings in recent years. Washington should snap out of its multicultural fog and end Islamic immigration here before we count Muslim honor crimes by the day, as the British now do.