In Stage Army of the Establishment news, the New York Times trumpets "A Generation Gap Over Immigration" to demonstrate that only fuddy-duddy racists (such as, presumably, Lakers coach Phil Jackson) are concerned about illegal immigration:

Meaghan Patrick, a junior at New College of Florida, a tiny liberal arts college in Sarasota, says discussing immigrationwith her older relatives is like ”hitting your head against a brick wall.”

Cathleen McCarthy, a senior at the University of Arizona, says immigration is the rare, radioactive topic that sparks arguments with her liberal mother and her grandmother. ”Many older Americans feel threatened by the change that immigration presents,” Ms. McCarthy said. ”Young people today have simply been exposed to a more accepting worldview.”

In the wake of the new Arizona law allowing the police to detain people they suspect of entering the country illegally, young people are largely displaying vehement opposition – leading protests on Monday at Senator John McCain’s offices in Tucson, and at the game here between the Florida Marlins and the Arizona Diamondbacks.

Meanwhile, baby boomers, despite a youth of ”live and let live,” are siding with older Americans and supporting the Arizona law.

That's an elaborate way of explaining away what the NYT doesn't like: polls show the Arizona law highly popular with voters. Sure, you evil racists may be in the majority for now, but you are demographically doomed, doomed we tell you! Bwa-ha-ha-ha!

Then to prove that Resistance Is Futile, the NYT trots out the following graph of metropolitan areas with the biggest difference in race between seniors and children. Please look at this listing carefully and see if the names of these wonderful Cities of the Future remind you of very different news stories from just one to two years ago: 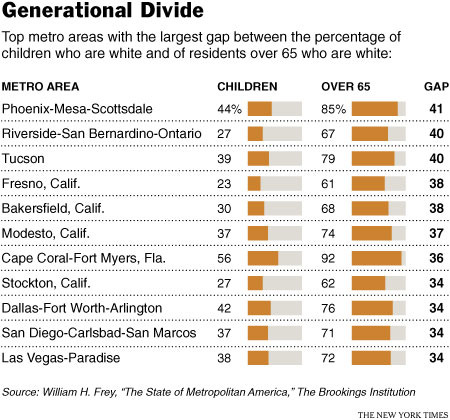 Do you get the joke?

The NYT sure doesn't.

This list overlaps hilariously with lists of the metropolitan areas with the worst home foreclosure rates in the country. With the exception of Dallas, these are all Sand State cities (California, Arizona, Nevada, and Florida — still, even in 2010, the four states with the worst default rates). These Cities of the Future are, to a close order of approximation, the places that crashed the economy in the Mortgage Meltdown.

Out of the 203 Metropolitan Statistical Areas in the country, seven of the NYT's favorites were on RealtyTrac's Q1-2009 list of the Worst Ten foreclosure rates: Phoenix, Riverside-San Bernardino, Bakersfield, Modesto, Cape Coral, Stockton, and Las Vegas. Two more of the NYT'sfavorites (Fresno and San Diego) were in the Worst Twenty.

On RealtyTrac's Q1-2010 listing of highest foreclosure rates, the NYT's darlings rank numbers one through five worst. RealtyTrac's entire worst 20 are in the four Sand States.