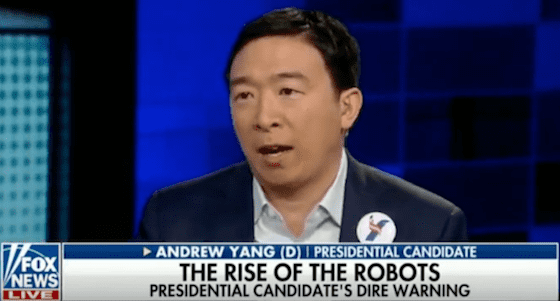 Only One 2020 Presidential Candidate Has Warned America about Automation

Martin Ford is a technology expert and writer whose 2015 book Rise of the Robots: Technology and the Threat of a Jobless Future woke up a lot of people about the fundamental changes automation will bring to the workplace and employment economy.

The book got my attention in particular about how insane it is to continue immigrating millions of low-skilled foreigners when many of the jobs they take will be obsolete for human workers in just a few years.

The word is gradually getting out that the technology of robots, automation and AI needs attention for the threat it poses, although today’s booming economy makes that future easy to ignore.

Presidential candidate for 2020 Andrew Yang has been a lone politician warning the public that disruptive smart machines are coming whether we want them or not. 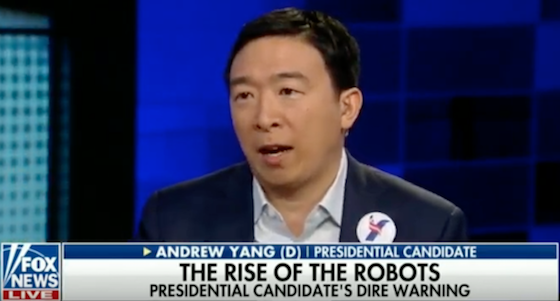 Sunday’s edition of The Hill contained an opinion piece by Martin Ford meant to be a reminder of the changes the world faces from this technology.

AI and automation will disrupt our world — but only Andrew Yang is warning about it, The Hill, November 10, 2019

Disruption of the job market and the economy from automation and the rise of artificial intelligence (AI) is one of the primary ideas animating Andrew Yang’s surprising campaign for the Democratic presidential nomination. Alone among the candidates, Yang is directly engaging with one of the central forces that will shape our futures.

Over the past ten years, I have written two books on the subject of artificial intelligence and its impact on the job market and the economy. I’ve spoken at dozens of events in more than 30 countries. The majority of my presentations were given to what you might call elite audiences — executives, technologists, Wall Street financiers, economists, government technocrats and so forth. I’ve found that, virtually without exception, these people take the specter of technological disruption seriously.

To be sure, not everyone buys into the possibility of widespread unemployment resulting from automation. But even the most skeptical generally recognize that the speed at which AI is advancing could create a stark divide, with a large and growing fraction of our workforce left struggling to maintain a foothold in the economy.

A recent report from the consulting firm Deloitte found that, among more than a thousand surveyed American executives, 63 percent agreed with the statement that “to cut costs, my company wants to automate as many jobs as possible using AI,” and 36 percent already believe that job losses from AI-enabled automation should be viewed as an ethical issue. In other words, while media pundits dismiss worries about automation, executives at America’s largest companies are actively planning for it.

It may seem odd to worry about AI and automation at a time when the headline unemployment rate is below 4 percent. But it is important to remember that this metric only captures people who are actively seeking work. Consider that, in 1965, only 3 percent of American men between the ages of 25 and 54 — old enough to have completed education but too young to retire — were neither working nor actively looking for employment. Today, that number is about 11 percent.

In other words, the percentage of working-age men completely disenfranchised from employment markets has nearly tripled. The economist and former Treasury secretary Laurence Summers has estimated that, by 2050, that number could more than double again to a quarter or even a third.

Would it be unreasonable to imagine that an economist in 1965 might have uttered the words “mass unemployment” if he or she had been told that the percentage of men detached from the workforce would soar in this way? To be sure, technology is not the only factor here — but it is almost certainly playing a central role.

Disruption from artificial intelligence will not be a straightforward narrative of robots stealing jobs. Instead, it will include job de-skilling, in which technology makes what was once well-paid work accessible to minimum-wage or gig-economy workers with little or no training. The story so far has largely been about the elimination of solid middle-class jobs requiring moderate skill levels and the emergence of lower-paying jobs in the service sector. Indeed, the economy’s propensity to create large numbers of low-wage service jobs has been one of the main factors that has led to the current low levels of unemployment.

However, it is very unlikely that these jobs will continue to be created at the current pace.

The robots that already play a vital role in Amazon warehouses will soon become more dexterous and able to perform many of the tasks that now require people. Automation will inevitably invade the fast-food industry, and traditional retailers will have little choice but to turn to labor-saving technology in order to remain viable in a sector increasingly dominated by Amazon.

Nor will more educated white-collar workers get a pass on the AI disruption. Jobs that involve relatively predictable manipulation of information — routine quantitative analysis, preparing periodic reports and so forth — will, in many cases, be easier to automate than lower-paid work that requires physical interaction.

All this is sure to unfold in an unpredictable, sporadic way. Rather than a robot or an algorithm directly replacing a worker, we are likely to see organizations completely restructure work environments and redefine job descriptions, as more and more of the tasks now performed by people are automated. The result, in most cases, will be fewer jobs — and, often, those jobs will be held by different workers with completely different skill sets and talents, and perhaps in different geographic locations.

The Democratic Party’s agenda increasingly is being shaped by the “Social Justice Left.” If you count yourself among this movement, you should know that AI-driven automation is not a fringe issue, nor can it be dismissed as a “tech bro” concern. Rather, it is poised to amplify the types of inequality that you care most about. A recent analysis from McKinsey, for example, found that automation will disproportionately impact African Americans, likely worsening the racial income and wealth gaps. The fact is that virtually everything Democrats care about — inequality, health care, poverty, the environment, education, the prosperity of the middle class — will be deeply influenced by relentless advances in artificial intelligence.

And yet, inexplicably, Andrew Yang is currently the only presidential candidate willing to speak honestly about the magnitude of the coming challenge and to propose solutions. (Continues)