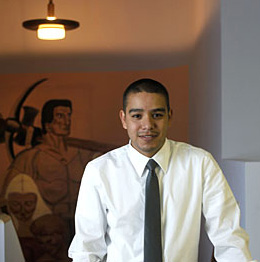 You have to shake your head at the level of this malfeasance, even for crazy-left California. It’s one thing for border-hopper Juan to advance to senior tomato picker in the field pecking order, but using California’s university system to become a lawyer on the backs of the state’s taxpayers is worse than a cruel joke.

The moocher-grad admitted straight out that he entered the university when California’s subsidization of illegal college students took place – proving if you build it, they will come!

The author is la Times perennial illegal booster, Hector Tobar, so the piece is sugar-soaked from start to finish. In fact, he asks, ”Will his adopted country now do right by him?” What Hector means is pass the DREAM Act. The Mexes expected to have comprehensive amnesty by now under President Obama, but they are willing to settle for the DREAM Act as a temporary consolation prize (aka a ”down payment” until they get the whole enchilada).

Ever since he was 8 years old, Luis Perez has dedicated his life to becoming an American.

In grade school, days after his arrival from Mexico, he studied hard to master English – it quickly displaced Spanish as his dominant language.

As a teenager he woke up every morning at 5:30 a.m. for a long bus trip across the San Fernando Valley, away from a neighborhood with a bad gang problem, to a high school where being a studious young man didn’t make him a social outcast.

When he eventually made it to college, it was the U.S. Constitution that grabbed hold of him, especially the Bill of Rights. And this year, his study of American institutions culminated with his graduation from UCLA School of Law.

Today, at age 29, Luis Perez has the right to call himself a juris doctor. But he can’t yet call himself an American. In fact, because he’s an undocumented immigrant, it will take an act of Congress to change that. But that hasn’t stopped him from trying.

”People used to tell me, ”Why go to college if you can’t get a real job when you graduate,’” he said. With no right to work for a large company or law firm, it seemed that only jobs in construction and or yardwork awaited him, no matter how educated he was.

”If I had listened to those people, I wouldn’t have done anything with my life,” he told me.

Perez is the first undocumented immigrant to graduate from UCLA’s law school. He’s taking the bar exam in January. ”I’m spending my Christmas with the books,” he told me. [. . .]

While he was still in high school, Perez lobbied state representatives for the passage of California Assembly Bill 540, which granted affordable, in-state college tuition to undocumented immigrants.

After AB 540 became law in 2001, he enrolled at UCLA and eventually earned a B.A. in political science and then his law degree. He became a student leader and worked construction jobs on the weekends to help pay for his tuition. (He still holds a construction job, in part to pay off $3,000 in law school debt.)

The state Supreme Court upheld AB 540 earlier this month. To some Californians, giving undocumented immigrants an affordable college education is an act of generosity that we cash-strapped Californians can’t afford.

Since subsidizing illegal alien college tuition costs the taxpayer $200 million annually to aid people who cannot legally work after graduation, it is ridiculous to continue to waste the people’s money on these foreigners at such a rate. But to Hector Tobar and his ilk, the DREAM Act will solve this problem. . . and invite millions more illegals to come and Mexifornicate the rest of the nation even more rapidly.