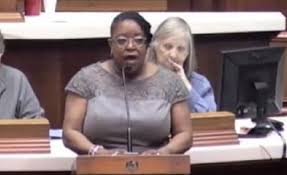 The best place to go to catch up after flinching from the Death of America Watch is One Old Vet. He never flinches (unlike me).

Allow me to share with you my own personal experience with this race-baiting Indiana state legislator.

A few years ago I was giving testimony before the Indiana State General Assembly on proposed legislation to stop the employment of ILLEGAL aliens in Indiana. This law was quite similar to the Arizona law, eventually receiving a similar fate.

About 10 minutes into my presentation, Rep. Vanessa Summers noisily stumbles in to the packed assembly carrying a large bag of McDonald’s Egg McMuffins, a coke and a cup of coffee. She sat her big fat ass into her front row desk, directly in front of me at the speakers podium, whereupon she immediately begins to inhale her food, one McMuffin after another with the relish and noise of a wood chipper.

She intentionally ingested her food in a manner meant to disrupt my presentation. Her open mouth mastication allowing food to drop on her desk was disgusting. Republican and Democrat colleagues were embarrassed by her conduct.

I am not surprised by her latest antics in the below article wherein she attempted to racebait a Republican State Representative with a claim that his 18 month old baby is a racist.

Summers pressed forward reiterating that she thought the child would become prejudiced if nothing is done now.

These people want a Police State.

As James Kirkpatrick has noted, recent action by the Left Establishment/Supreme Court Division means that fewer of these clowns will be visible on the national scene.

But they are still out there and so are the evil people who want to utilize their hatreds.