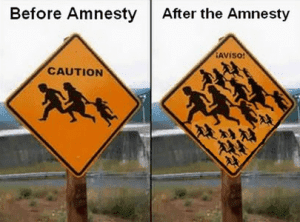 One Old Vet is in my opinion the best news aggregator for following America’s Immivasion disaster, putting the lavishly funded Inside the Beltway Immigration Restraint outfits to shame.

Unnoticed until now, a draft solicitation for bids issued by U.S. Citizenship and Immigration Services (USCIS) Oct. 6 says potential vendors must be capable of handling a “surge” scenario of 9 million id cards in one year “to support possible future immigration reform initiative requirements.”

The request for proposals says the agency will need a minimum of four million cards per year. In the “surge,” scenario in 2016, the agency would need an additional five million cards – more than double the baseline annual amount for a total of 9 million.

“The guaranteed minimum for each ordering period is 4,000,000 cards. The estimated maximum for the entire contract is 34,000,000 cards,” the document says.

Long time readers of OOV know that I have been saying for over a decade that there may be more than 33 million ILLEGAL aliens currently inside the U.S.

I predicated that estimate on the 1986 amnesty promise from Ted Kennedy and AZ Senator Juan McCain that ONLY 1 million ILLEGALS would be eligible and apply for citizenship back then. As we all know, more than three times that number applied for citizenship!

Since the oft used estimate of ILLEGALS currently in the U.S. is 11 to 12 million, can we reasonably expect that there may be three times that number? I think so, and apparently so does Obama, Inc. given the fact that they are contracting for the printing of 34 MILLION work authorization permits for Obama’s amnesty.

Let’s go with the 34 million figure for a moment.

It is a FACT that on average an immigrant who becomes a citizen sponsors 5 relatives within 10 years of becoming a U.S. citizen. This is called “chain migration”. It means that with 34 million new “potential” citizens we can expect them to sponsor 170 MILLION relatives for citizenship within 10 years.

Let’s extrapolate what would happen if chain migration took it’s natural course after an Obama amnesty:

• Our 34 million ILLEGALS sponsor 5 relatives each (170 million) bring our population to 529 million within 10 years following an amnesty.

• Those 204 million (170M + 34M) “naturalized” citizens then sponsor 5 more relatives or 1.2 BILLION people bring our population to 1.7 BILLION within 20 years following an amnesty.

Does ANYONE think this country can support such numbers of people or even a fraction of those numbers? I do not!

As usual we ask: WHERE IS GOP?

(Answer: wallowing in their Adelzuck bribes.)

Peter Brimelow has stated the VDARE.com view: Obama’s Border Dissolution Is Treason. The Answer Is Impeachment. It Would Work.

Nothing less will deter Obama.