One of San Francisco's Protected Felons Surfaces — in Jail 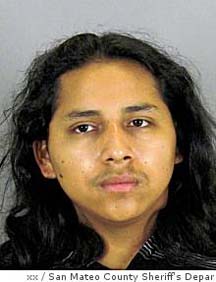 It's always good to have a mug shot to go with statistics. This character, Eric Antonio Uc-Cahun of Mexico, is one of the vicious illegal alien criminals who have been protected by San Francisco's sanctuary policy. His rap sheet is lengthy and includes violent offenses, but ever-gentle San Francisco released him onto the streets to do more crime — he is now under arrest in San Mateo County for attempted murder, where the victim had been "gutted, like you gut a pig."

Uc-Cahun's criminal history as a juvenile dates at least from Aug. 13, 2006, when San Francisco police reports show that he was arrested along with two other suspected gang members in the assault on a man at Dolores Park. The victim was hit in the head and threatened with a gun after the group demanded to know whether he was a gang member, according to the reports.

Uc-Cahun did not cooperate with police, refusing even to say where he lived, authorities said. The police report on the attack says Uc-Cahun was a Sure?±o gang member known as "Tweety" who had "numerous prior contacts" with law enforcement.

Uc-Cahun, then 17, was taken to juvenile hall and eventually was found to have committed felony assault. A San Francisco juvenile court placed him on probation and freed him from juvenile hall.

On Oct. 18, 2006, shortly after his release, Uc-Cahun was arrested again, this time for allegedly being part of group that accosted a stranger on the street and ripped a chain from his neck.

He spent four months in juvenile hall before being found responsible for a single charge of felony assault. He turned 18 by the time he was freed in February 2007 and put on a year's probation. [Protected by S.F., youth offender now a suspect in attempted murder, by Jaxon Van Derbeken, San Francisco Chronicle, August 21, 2008]

In my hopeful moments, I imagine that the local United States Attorney Joseph Russoniello might charge some of the implicated City Hall officials with harboring. He keeps being quoted in tantalizing ways.

Russoniello said the arrests of Uc-Cahun and Ramos raise the question of whether other juvenile offenders who were kept from deportation in San Francisco went on to become criminal suspects as adults.

"These attacks demonstrate that these people are acting with impunity, because they have little to fear," Russoniello said.

He was a little more direct in an August 9 KCBS report, Sanctuary City a Federal Matter.

Federal investigators are looking into San Francisco's sanctuary policy which sent illegal juvenile offenders back home, or in some cases to Southern California group homes, backed by city funds.

Russoniello's office is looking into whether laws were broken. He says criminal charges are a possibility.

Also, you can hear Russoniello being interviewed on the John and Ken radio show in LA August 4 about the San Francisco criminal protection policy: Listen here.

Just a couple days ago, the San Francisco Immigrant Rights Commission recommended the continued protection of illegal alien felons who claim to be juveniles (Panel urges S.F. to help teen immigrant felons). What a city!