Once Dependably Liberal, the Netherlands Is Growing Sick of Imported Diversity

Sunday’s Washington Post had a major front-page story highlighting Wednesday’s election in the Netherlands and how immigration is an important issue with voters. 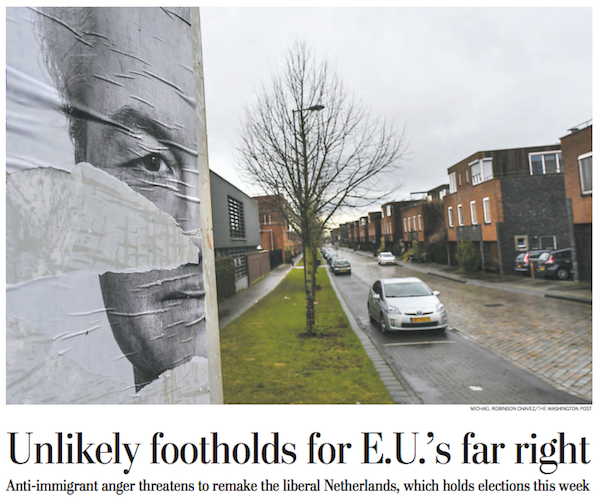 Naturally, the Post is shocked that liberal Holland would reject open borders and Muslim diversity. It regards any deviation from the one-worlder doctrine to be “far right.” The paper observes, “the Netherlands has been relatively insulated from mass immigration” — but that’s only in comparison with neighbors like France that have turned into armed camps to keep their streets safe.

The article was clearly written before violent protests broke out among Turkish residents who were angered at the Netherlands blocking the Turkish foreign minister from visiting. The official intended to promote homeland politics among dual citizens to increase voter interest in an upcoming referendum that would give more power to President Erdogan. Dutch riot police used batons and water cannons to break up the thousands of Turks who had responded to social media calls for them to complain at their embassy in Rotterdam about the alleged insult. Erdogan called the Dutch “Nazi remnants” over the affront, so the situation is a diplomatic stinker.

The chaotic scene did not reflect well upon diverse immigration a few days before the Dutch election. The mess won’t hurt the candidacy of Geert Wilders, who fired off a strong message to Turkish citizens, telling them to forget about EU membership and an open border to the continent:

The Post clings to the liberal belief that people wanting to maintain their culture and public safety are somehow “fringe” when those values are entirely normal.

RISING RIGHT | A periodic examination of the people and pressures driving European politics away from the mainstream — and toward the fringe.

AMSTERDAM — Xandra Lammers lives on an island in Amsterdam, the back door of her modern and spacious four-bedroom house opening onto a graceful canal where ducks, swans and canoes glide by.

The translation business she and her husband run from their home is thriving. The neighborhood is booming, with luxury homes going up as fast as workers can build them, a quietly efficient tramway to speed residents to work in the world-renowned city center, and parks, bike paths, art galleries, beaches and cafes all within a short amble.

By outward appearances, Lammers is living the Dutch dream. But in the 60-year-old’s telling, she has been dropped into the middle of a nightmare, one in which Western civilization is under assault from the Muslim immigrants who have become her neighbors.

“The influx has been too much. The borders should close,” said Lammers, soft-spoken with pale blue eyes and brown hair that frames a deceptively serene-looking face. “If this continues, our culture will cease to exist.”

To Europe’s powers that be, the threat looks dramatically different but no less grave: If enough voters agree with Lammers and support the far right in elections here on Wednesday and across the continent later this year, then it’s modern Europe itself — defined by cooperation, openness and multicultural pluralism — that could come crashing down.

The stakes have risen sharply as Europeans’ anti-establishment anger has swelled. In interviews across the Netherlands in recent days, far-right voters expressed stridently nationalist, anti-immigrant views that were long considered fringe but that have now entered the Dutch mainstream.

Voters young and old, rich and poor, urban and rural said they would back the Geert Wilders-led Freedom Party — no longer the preserve of the “left-behinds” — which promises to solve the country’s problems by shutting borders, closing mosques and helping to dismantle the European Union.

“They’ve found a very powerful narrative,” said Koen Damhuis, a researcher at the European University Institute who studies the far right. “By creating a master conflict of the national versus the foreign, they’re able to attract support from all elements of society.”

Along the way, Europe’s old assurances have been swept aside. The far right may exist, the continent’s political establishment has long told itself, but a virtuous brew of growing economic prosperity, increased cross-border integration and rising education levels would blunt its appeal. Most important all, the pungent memory of the nationalist right’s last turn in power would keep it from ever gaining control in Europe again.

But in 2017, every one of those assumptions is being challenged — perhaps even exploded.

After the transatlantic jolts of Brexit and Donald Trump last year, continental Europe is bracing for a possible string of paradigm-rattling firsts in its postwar history.

In France, far-right leader Marine Le Pen has a credible shot at a triumph in spring presidential elections. In Germany, an anti-immigrant party appears poised to win seats in the national parliament this fall. And here in the Netherlands, a man convicted only months ago of hate speech could wind up on top when votes are counted in next week’s national elections.

At first glance, the Netherlands — a small nation of 17 million that has long punched above its weight on the global stage through seafaring exploration and trade — seems an unlikely setting for a populist revolt.

Unlike in France, where the economy continues to stagger nearly a decade on from the global financial crisis, the indicators in the Netherlands are broadly positive: falling unemployment, healthy growth and relatively low inequality. By most measures, the Dutch are some of the happiest people on Earth.

And unlike Germany, where Chancellor Angela Merkel opened the country’s borders to a historic influx of refugees in 2015, the Netherlands has been relatively insulated from mass immigration. Compared with its neighbors, the Dutch took significantly fewer asylum seekers during the refugee crisis, and much of the country’s nonnative population settled in the Netherlands decades ago.

Those differences make it all the more surprising that the far right’s message resonates here and hint at just how difficult it could be to halt the global populist wave.

For much of the past two years, Wilders’s Freedom Party has led the polls, though it has recently dropped into a virtual tie with the ruling center right.

Because of the deeply fragmented nature of Dutch politics — there will be 28 parties on the ballot Wednesday — the Freedom Party could come out on top with just 20 percent of the vote. Even if it does, it is considered extremely unlikely that Wilders would end up governing, because other parties have spurned him.

But he has already had an outsize influence, forcing rival politicians — including the prime minister, Mark Rutte, — to shift their policies and rhetoric in his direction.

To many Wilders supporters, the overall picture of a growing economy with a comparatively small number of recent immigrants is beside the point. Their reasons for backing the platinum-haired politician — who refers to Moroccans as “scum” and advocates a total ban on Muslim immigration — run much deeper.

“The main issue is identity,” said Joost Niemöller, a journalist and author who has written extensively on Wilders and is sympathetic to his cause. “People feel they’re losing their Dutch identity and Dutch society. The neighborhoods are changing. Immigrants are coming in. And they can’t say anything about it because they’ll be called racist. So they feel helpless. Because they feel helpless, they get angry.”

And today, that anger can be found far beyond the poorer, less-educated, working-class areas where Wilders and his party first gained substantial support.

“I hear it on the tennis court and at the golf club. People don’t want immigrants,” said Geert Tomlow, a former Freedom Party candidate who fell out with Wilders but still sympathizes with many of his positions. “One-third of Holland is angry. We’re angry. We don’t want all these changes.”