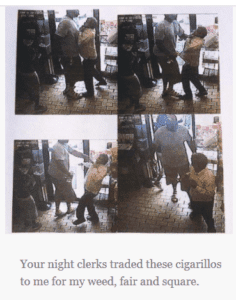 In the two and a half years since Michael Brown, a black 18-year-old, was shot and killed by a white police officer in Ferguson, Mo., the explosive case has been parsed in intricate detail. Witnesses offered varying descriptions of the fatal encounter. Investigators examined bloodstain evidence on the street where Mr. Brown died. And the police released a security video from a nearby store that showed Mr. Brown pushing a worker and taking cigarillos minutes before the shooting.

But a second, previously unreported video from that same convenience store included in a new documentary is raising new questions about what happened in the hours before the shooting on Aug. 9, 2014.

The footage shows Mr. Brown entering the store, Ferguson Market and Liquor, shortly after 1 a.m. on the day he died. He approaches the counter, hands over an item that appears to be a small bag and takes a shopping sack filled with cigarillos. Mr. Brown is shown walking toward the door with the sack, then turning around and handing the cigarillos back across the counter before exiting.

Jason Pollock, a documentary filmmaker who acquired the new tape, says the footage challenges the police narrative that Mr. Brown committed a strong-armed robbery when he returned to the store around noon that day. Instead, Mr. Pollock believes that the new video shows Mr. Brown giving a small bag of marijuana to store employees and receiving cigarillos in return as part of a negotiated deal. Mr. Pollock said Mr. Brown left the cigarillos behind the counter for safekeeping.

“There was some type of exchange, for one thing, for another,” Lesley McSpadden, Mr. Brown’s mother, says in Mr. Pollock’s documentary, “Stranger Fruit,” which premiered Saturday at the South by Southwest festival in Austin, Tex., and examines the shooting from the family’s perspective.

I really don’t see how this is supposed to help Brown’s case, but then the whole story fell apart years ago.

Too bad about the thousands of incremental murder victims ever since.