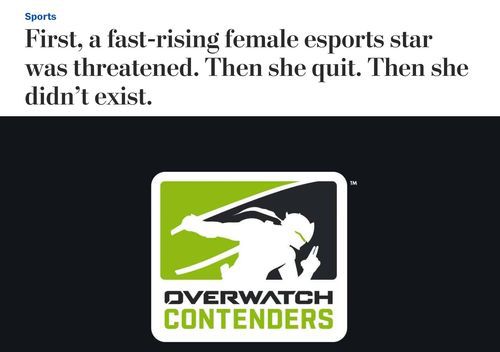 On The Internet, Nobody Knows You Are A Guy

First, a fast-rising female esports star was threatened. Then she quit. Then she didn’t exist.

In December, a minor league esports team thought it had signed a fast-rising, highly ranked female player who played under the nickname of Ellie.

In case you are wondering, eSports is watching other people play video games as a spectator sport. Why you would want to is unexplained. And what exactly is the distinction between “minor league esports” and, presumably, major league esports is beyond me.

As the news of the signing reverberated around the Internet, Ellie shared screen captures of threats from online attackers and less than two weeks later, Overwatch Contenders team Second Wind tweeted that she left the team, “due to some unforeseen reactions.” The circumstances only grew more mysterious from there.

After a few days of online rumbling on Reddit, what seemed like yet another case of toxicity and misogyny in gaming turned into something far stranger, and problematic. Ellie was revealed as a fraud, a fake account operated by a male player posing as a female.

“We found that ‘Ellie’ was a fabricated identity … created by a veteran player to obfuscate their identity,” an Overwatch League spokesperson said.

The hoax reveals the unique challenges esports leagues and teams face as they try to move the sport towards mainstream respectability, as well as progress beyond the longstanding instances and accusations of sexism within the gaming community from both players and game-publishing companies.

In other words, guys are constantly inventing dubious new pastimes, such as professional spectator videogaming, then society gets concerned that not enough women are interested and/or good at it, so demand exceeds supply.