On Fox News, Tucker Carlson Tells The GOP They Need To LISTEN To Trump Voters On Immigration

Friend of immigration enforcement Tucker Carlson usually appears on a Fox News morning show where his sensible views about the immigration threat to national security get fewer eyeballs. But on Tuesday he was part of the panel on the network’s major news show, and he couldn’t resist bringing up the lessons of Trump that the Republican Party refuses to hear, that heartland Americans want immigration to be controlled and reduced.

Will speaking a tiny morsel of truth about the national question cause Carlson to disappear from Fox’s prime time? We’ll see.

TUCKER CARLSON:I would say the Republican Party in Washington should also not ignore Trump’s voters, and the one issue that they can win a lot of these voters back — and they should, he just won the Republican nomination beating 16 people, all of whom were backed in a sense by Washington Republicans. There’s a statement being made by voters to DC: I think they just need to move on immigration. I actually think a lot of the details of economic policy, the subjects Ryan is most interested in, Trump would probably move on those, but they’ve got to demonstrate a good faith effort to secure the borders and at least to rethink our current immigration scheme which has been in place for 51 years. Nobody is even willing to talk about it. Trump’s voters clearly want a public conversation on that. Why can’t they move on that?

CARLSON: But the population is. There was a series of polls in swing states done last week on how do you feel about a temporary ban on Muslim immigration. Everyone in DC’s horrified by the idea. It’s like evidence of membership the Nazi Party, and yet across the country, huge numbers of people — 65 percent of Wisconsin voters favor that, not all Republicans, a lot of Democrats. It doesn’t mean you should back it; it does mean you need to rethink your comfortable assumptions about immigration if you’re the Republican Party.

STEVE HAYES: In a country founded on freedom of religion, it’s not a good idea to ban religion.

CARLSON: It’s a little more complicated than that.

CARLSON: I’ve never noticed a lot of principles among Republicans in Washington; perhaps they’re there, they’re hiding them well. I would just say, look at the destruction of Europe underway now — one of the lessons from Trump. It doesn’t mean we need to ban people who are Muslims, I agree that’s an overstatement, kinda crazy, but it does mean keeping your immigration regime the same in the face of what’s happening in Europe is equally crazy.

HAYES: I agree with you entirely. They need to respond to this clearly, but if you make the argument — you’re not making it, others have made it — that they just cast aside these pillars of conservatism because Donald Trump is making certain arguments about trade and other things, I think that’s unwise, and I think that’s one of the reasons that you’re seeing this resistance from some people. They don’t want to support somebody who opposes the things that they fought for and held most dear for years.

CARLSON: Open borders is one of the things they held most dear for years. They’re going to have to give up on it because the country just doesn’t support it. They’ve defended it and they need to change.

Actually, what would be wrong with ending immigration from Muslim nations entirely? America didn’t have visas for Nazis in WWII, and Islam has been at war with the West for 1400 years. America’s first war, aka the Barbary Wars, was against African Muslim kingdoms where President Thomas Jefferson sent the Navy to destroy the Islamic pirates who had terrorized the seas with the enslavement of more than a million Europeans over centuries, as well as the capture of American seamen.

Certainly Tucker Carlson is right to point to the European disaster caused by the unpopular Muslim influx, which has brought terror and death.

Below, the Brussels airport was bombed by jihadists on March 22. Thirty-two people died in three Islamic attacks in the area that day. 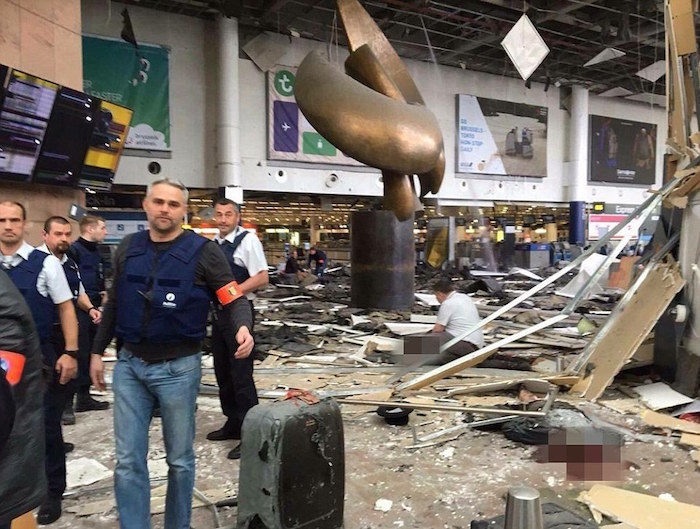