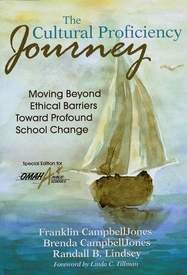 The Omaha school system ordered up a pile of diversity training books to give to every staff member, from teachers to custodians, at a cost of $130K. (Diversity agitprop doesn't come cheap.)

The school board apparently believes that teachers must be indoctrinated with diversity ideology (aka cultural proficiency), so they will believe that all cultures are morally equal and will instruct students accordingly.

Teachers are required to attend study groups to discuss the book.

A strong theme in the book appears to be the evil of "white privilege."Â Once that is smacked down, universal peace will break out.

The Omaha Public Schools used more than $130,000 in federal stimulus dollars to buy each teacher, administrator and staff member a manual on how to become more culturally sensitive.

The book by Virginia education consultants could raise some eyebrows with its viewpoints.

The authors assert that American government and institutions create advantages that "channel wealth and power to white people," that color-blindness will not end racism and that educators should "take action for social justice."

The book says that teachers should acknowledge historical systemic oppression in schools, including racism, sexism, homophobia and "ableism," defined by the authors as discrimination or prejudice against people with disabilities.

The Omaha school board approved buying 8,000 copies of the book - one for every employee, including members of the custodial staff - in April. The decision to buy the book was made 11-0, with board member Mary Ellen Drickey passing on the vote.

Janice Garnett, OPS assistant superintendent of human resources, said she could not recall another time that the district had bought copies of the same book to give to every staff member.

Employees will be asked to read a couple of chapters each quarter and then meet in study groups to discuss the book using a study guide produced by the district, she said. For teachers, the study sessions will be a part of their professional development.

School board President Sandra Jensen said the district doesn't endorse everything in the book, nor does she expect employees to adopt the authors' positions. The book is intended to open a dialogue, she said.

"The purpose of providing this resource is to help staff see that people come from a multitude of different backgrounds which cause them to respond differently to the same set of facts, depending on their personal perspectives," she said in a statement. "Recognition that one might have a certain perspective is critical to treating all people equally."

Representatives of other large Nebraska school districts - Lincoln, Millard, Papillion-La Vista and Bellevue - said they have not used the book for training teachers, nor have the Council Bluffs Community Schools and Des Moines Public Schools.

The book that OPS bought, "The Cultural Proficiency Journey: Moving Beyond Ethical Barriers Toward Profound School Change," includes a worksheet for teachers to score themselves on a continuum of cultural sensitivity. The continuum ranges from "cultural destructiveness," as evidenced by genocide and ethnocide, to "cultural proficiency," depicted as the highest level of awareness.

Only those educators who acknowledge the existence of white privilege in America, that "white" is a culture in America and that race "is a definer for social and economic status" can reach proficiency, the authors contend. Those who score poorly on the worksheet are asked in the book what they will do "to align yourself with the values expressed."

Jensen said the district will not use the book to evaluate or judge employees.

The book says teachers must overcome irrational fear of homosexuality and reject the "color-blind" approach to teaching in which teachers treat all children the same. Instead, the group identity of students of color should be recognized and esteemed, the authors say.

The authors ask readers to reflect on several hypothetical cases, including that of a gay "teacher of the year" afraid to post family photos of his male partner for his school's Family Day, an African-American parent upset by a sixth-grade Early-American Day because African-Americans were enslaved in those days, and a principal whose attempt to reach out to Muslim students backfires when he announces over the intercom that students should welcome Muslims though they "might believe in violence."

The authors - Franklin and Brenda CampbellJones and Randall B. Lindsey - all former teachers, write that their intent in the book is "to prepare educators to unshackle themselves from tradition and become facilitators for reconciliation of historical injustices."

Franklin CampbellJones said in an interview that although some issues in the book are considered "challenging" and "taboo," discussing them is important to break down barriers to educating every child.

He said the book has been well-received by other school districts using it, including San Diego and Atlanta, and districts in Maryland and Canada.

The push for cultural proficiency, sometimes referred to as cultural competence, is a trend across the country, though what's meant by these terms varies. Definitions range from encouraging teachers to understand the cultural backgrounds of students to more aggressive efforts to rewrite curricula and adapt school systems to immigrant cultures.

A primary concern of critics is that schools and universities could use cultural proficiency as an ideological litmus test and that the money put toward such programs could be better spent directly on academics.

In 2009 the University of Minnesota-Twin Cities drew criticism when a task force proposed introducing cultural competency requirements for its teacher candidates.

The task force proposed that future teachers, in order to be recommended for licensure, should "recognize and demonstrate understanding of white privilege," fight for social justice and take tests to measure their "intercultural sensitivity" and "cultural intelligence."

Among the critics were the Foundation for Individual Rights in Education, a nonprofit watchdog group advocating individual rights at America's colleges and universities, which argued that the proposals intruded on matters of individual freedom and conscience.

The Nebraska Board of Education is considering drafting teacher standards that call for teachers to be "culturally competent," a move spokeswoman Betty VanDeventer said is intended to make teachers more aware and respectful of children of all cultures. Last winter, board members authorized a 41-member committee of teachers, principals, parents and others to draft the standards.

The proposed standards call upon teachers to, among other things, connect with a student's traditions to move him toward academic success, use "culturally appropriate instructional strategies" and make sure tests are valid and address the diversity of students.

The draft standards do not include any of the social justice goals contained in the book acquired by OPS.

The state plans to hold forums this summer and fall on the draft standards. The Nebraska standards would be voluntary. Local districts could decide whether to adopt them.

Paul Peterson, director of the Program on Education Policy and Governance at Harvard University, and a senior fellow at the conservative Hoover Institution at Stanford University, said cultural proficiency is part of a broader agenda advocated by people "who think that we should have a teaching force that has a certain political perspective."

About OPS spending stimulus money on the book, he said: "That must be a wealthy school district."

Stimulus rules allowed districts to spend money on teacher training, but Peterson suggested the money would be better spent on academic training.

Peterson said it's important that teachers be aware of the traditions a child brings to the school, and to take those into account when working with the pupil and deciding how to engage and motivate him or her.

He is concerned, however, about the book's general statements about the white population. That kind of generalization can be "extremely misleading" and "it would seem it would not be the kind of book you would distribute," he said.

Jensen said there's no hidden agenda with the book study. She said she had started reading the book before the board voted to approve the purchase, and she intends to finish it and participate in the sessions.

Asked last week if she believes white privilege exists in Omaha, Jensen said: "That depends on the cultural lens that one looks through."

The district, like most across the country, has struggled to close stubborn achievement gaps between whites and minorities.

Garnett, with OPS, said the district will use the book as a conversation starter on topics such as social equity, cultural understanding and racial justice.

"We're not saying that every idea in that book you have to accept," Garnett said. "Not at all. What we're saying is let's explore this whole concept and see where we want to be as a school district when it relates to the diverse student population we now serve."

Teachers will be asked to reflect on the book this year, and then next year the district will look for ways to apply some of the concepts in the classroom and workplace, she said.

That will include looking at "culturally responsive teaching" as a way to improve achievement for kids, Garnett said.

In defense of the district's purchase, OPS spokeswoman Luanne Nelson pointed to a study released by two Latino advocacy groups in Massachusetts calling for cultural proficiency in that state's schools.

When there are gaps in achievement between whites and minorities, schools need to identify obstacles to learning embedded in school culture, policies and practices, according to the study released by the Sociedad Latina and the University of Massachusetts' Mauricio Gaston Institute for Latino Community Development and Public Policy.

Nancy Edick, dean of the College of Education at the University of Nebraska at Omaha, said it is "imperative" that teachers are prepared for increasingly diverse schools.

The hope is that teachers develop an understanding and appreciation for diversity in the classroom, school and community, and that they see "the increasing diversity we're all experiencing is not a threat, it's an opportunity," she said.

"The rich life experiences of a diverse classroom contribute to an excellent education. It's an education that helps prepare our kids for a world they're going to live in, an increasingly diverse world," Edick said.