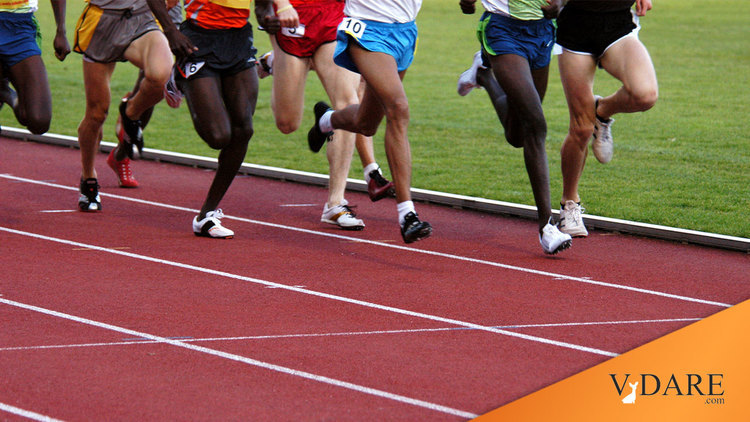 I sometimes think that it is excessive sentimentalism, more than anything else, will destroy the American Nation. Of course, there is a highly legitimate role for emotion in a country’s self-assessment. But with celebration of the deeds of the men who founded and sustained the country more or less suppressed, it seems the only thing the MSM will allow Americans to show emotion about is Immigration.

This is a teary piece about the presence of 33 immigrants in the US Olympic squad - a more significant number than at first glance, when you think of the low age of all these kids.

For those seeking symbolism, it's hard to top the men's 1,500-meter squad - Kenya native and Tucsonan Bernard Lagat; Lopez Lomong, one of the "lost boys" of Sudan's civil war who spent a decade in a refugee camp and then attended Northern Arizona University;

"It's a magical time," U.S. men's track coach Bubba Thornton said. "I'm glad that these young men found their way here. It may just remind us all of where we came from, and how hard the struggle may have been, and how big the dream was to be here."

Thornton’s comments are, of course, rubbish. Munificent refugee programs and airlifts were absolutely not the way most American’s ancestors arrived here.

But there is a more serious issue involved. It is well stated in the article:

Randy Capps, a demographer with the nonpartisan Urban Institute who studies immigrant families, sees the U.S. as keeping pace with global competition in its acceptance of foreign-born athletes.

"Would you rather have them competing for someone else? Would you rather the U.S. be more competitive or less competitive?" he asked. "You wouldn't want an immigration policy that would exclude people who could potentially be the best at what they do."

What is the objective of Olympic participation? Is it to stimulate athleticism, with all its proclaimed advantages to health and character, amongst American youth? Or is it just the gratification of a fat, middle aged, sports bureaucracy - and the MSM?

It appears general sport is going the way of Tennis and Baseball, with sports bureaucrats scouring the world for athletes where genetic or social factors cause the production of high fliers in particular sports.

Why should any American teenager give up the pleasures of the Mall or some more hours on video games, if they know at the end of the day some paragon from the other side of the world is going to be parachuted in before them? Our children have numerous problems, but they are not, in fact, totally stupid.

Sport seems to be turning into a competition in importation skills. The country would be better served with fewer medals and more American also-rans.

Try to explain this to Randy Capps. (Signed copy of Alien Nation to anyone who figures out Bubba Thornton's email.)

Update:Â  Email Coach Thornton at bthornton@mail.utexas.edu. (The person who found this already has a signed copy of Alien Nation. We'll have to think of something else.)