The President who thinks we shouldn't jump to conclusions about Dr. Hasan's Jihad doesn't want an investigation to clarify the facts either. What possible good could come from covering up this attack? Does he think Americans will forget about the first terrorism on our soil since 9/11?

President Barack Obama on Saturday urged Congress to hold off on any investigation of the Fort Hood rampage until federal law enforcement and military authorities have completed their probes into the shootings at the Texas Army post, which left 13 people dead.

On an eight-day Asia trip, Obama turned his attention home and pleaded for lawmakers to "resist the temptation to turn this tragic event into the political theater." He said those who died on the nation's largest Army post deserve justice, not political stagecraft.

"The stakes are far too high," Obama said in a video and Internet address released by the White House while the president he was flying from Tokyo to Singapore, where Pacific Rim countries were meeting.

Army psychiatrist Maj. Nidal Malik Hasan, 39, was charged on Thursday with the shooting spree at Fort Hood last week. Army investigators have said Hasan is the only suspect and could face additional charges. [Obama urges Congress to put off Fort Hood probe, November 14, 2009 ]

Meanwhile, several soldiers' funerals are scheduled for Saturday. Sgt. Amy Krueger's casket was on view in her high school in Kiel, Wisconsin, shown below. 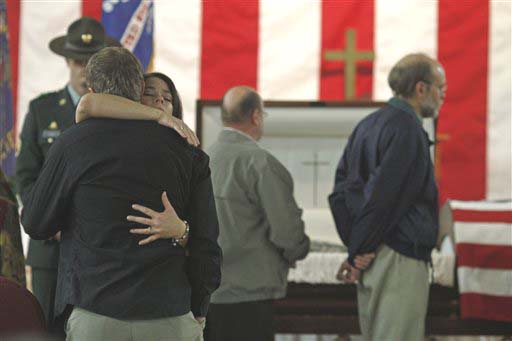