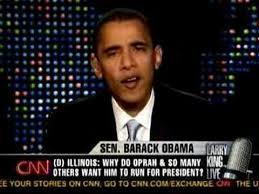 Obama Supported Amnesty In 2007, When He Was A Senator—But That Wasn't Unconstitutional

The nation thundered no. And Congress sustained the nation.

It happens that in 2007, Barack Obama was very much for amnesty. Although still a first term Senator, he was a cool black first term Senator, and thus people cared what he thought. The link above on Obama’s name—added by me, not Pat—goes to Obama’s appearance on Larry King Live, March 19, 2007, and Senator Obama was saying things like

Number one, we're going to have to secure our borders. And this past year, the Senate invested billions of dollars in improving border security. I think that's important because I think all Americans think that we should be able to regulate who comes in and out of this country in an orderly way, not only for the sake of our sovereignty, but also to avoid the hundreds of people who have been dying across the desert, the enormous costs that are placed on border states and border towns.

This, as Mickey Kaus points out, has always been the big lie of immigration “reformers.” Their reaction to the border surge proves that—and Obama, as Reactor-In-Chief, is the best proof. [Lie at Heart of “Immigration Reform” Exposed, Daily Caller, July 14, 2014]

What Obama also told Larry King, and this part he did mean, was

But I think that if we have a program of that sort, then we can combine the inherent compassion of the American people with the tough- mindedness that's necessary for our security and our long-term wellbeing. [Links added by me.]

What he’s doing now, with his Administrative Amnesty, and his cooperation with the Border Surge, where he’s using Federal funds to fly the illegals all over the country—Mark Steyn referred to him as the Coyote-In-Chief—that’s unconstitutional, in defiance of the law, and an impeachable offence.