The President has gotten a lot of flack from women’s groups who noticed that his new cabinet members were all white males, particularly after Obama attacking Mitt Romney during the campaign for the “binders full of women” (in Romney’s inartfully expressed openness to appointing qualified women). The boorish White House rubbed in the Old Boy Club aspect by releasing a picture of the advisor guys meeting in Obama’s man-cave. 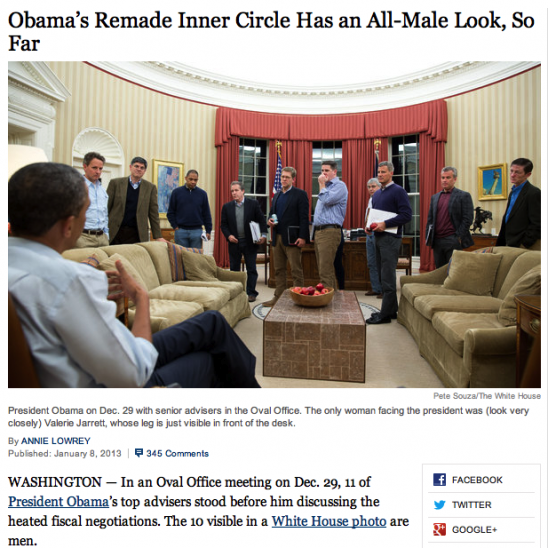 Charlie Rangel, normally a major Obama fawner, said the white male cabinet was “embarrassing as hell”, for Pete sake. How often do you see an embarrassed Democrat?

In response to criticism, the White House rushed out a more politically correct photo with a couple women who looked like secretaries.

That was Thursday. By Friday, a more interesting picture was posted on the WhiteHouse.gov website. Look closely at the woman in the black blazer leaning assertively toward the President — it’s Cecilia Munoz, the long-time mouthpiece of La Raza, now the Director of Intergovernmental Affairs. To the left of Munoz is Felicia Escobar, Senior Policy Director for Immigration.

So the White House is cleverly sending a secondary message. On the surface, it’s another picture of women having influence with the President. But for those tuned in to immigration, the photo is reassuring the amnesty demanders that they haven’t been forgotten in all the struggles about gun restriction and the budget. Given the participants, the meeting is probably about immigration. You can easily imagine from her posture that Munoz is firmly urging the President to get hopping on his big amnesty giveaway.

Don’t worry, Raza moochers! Obama is still there for you. 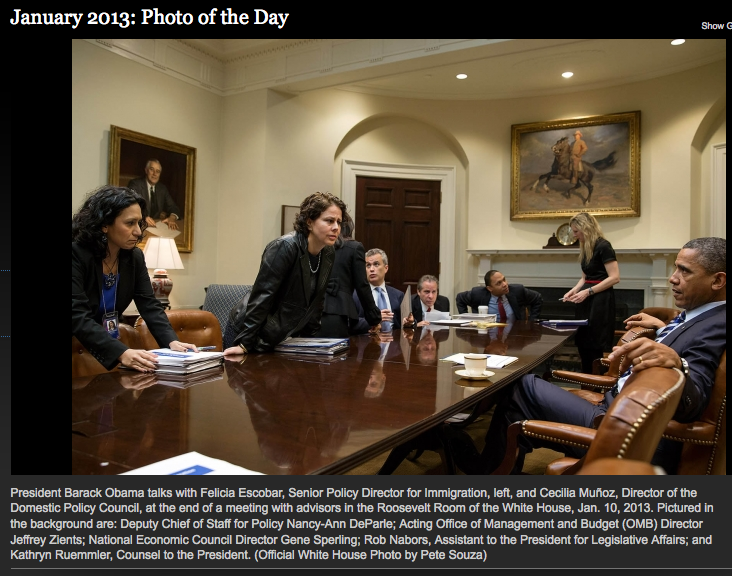 Here’s the caption, which is kind of small in the photo:

President Barack Obama talks with Felicia Escobar, Senior Policy Director for Immigration, left, and Cecilia Muñoz, Director of the Domestic Policy Council, at the end of a meeting with advisors in the Roosevelt Room of the White House, Jan. 10, 2013. Pictured in the background are: Deputy Chief of Staff for Policy Nancy-Ann DeParle; Acting Office of Management and Budget (OMB) Director Jeffrey Zients; National Economic Council Director Gene Sperling; Rob Nabors, Assistant to the President for Legislative Affairs; and Kathryn Ruemmler, Counsel to the President. (Official White House Photo by Pete Souza)