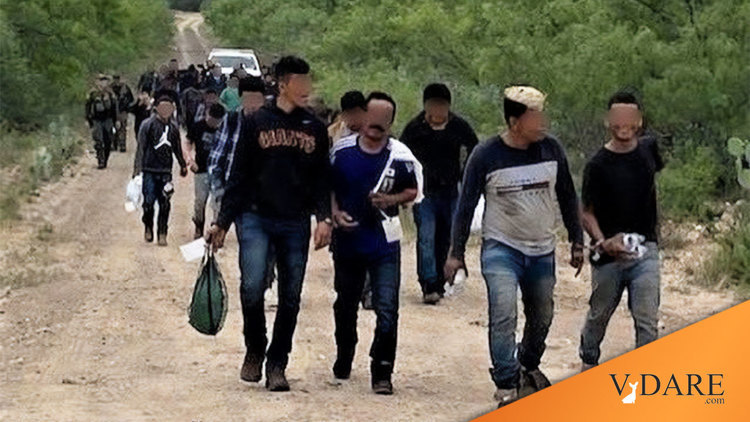 Flow of illegals down, and border arrests are down as well:

Despite massive increases in manpower, the U.S. Border Patrol is still intercepting only about 61 percent of would-be illegal immigrants along the U.S.-Mexico border, according to an audit that the investigative arm of Congress released Wednesday.

The findings, which for the first time show a broad estimate of how many illegal immigrants the Border Patrol fails to catch each year, emerge as pressure builds on Congress to move past border security and begin to grant legal status to the estimated 11 million illegal immigrants in the U.S.

The Government Accountability Office report found that an estimated 208,813 illegal immigrants escaped capture along the nearly 2,000-mile border. Slightly more than half of them turned back to Mexico, and the others proceeded deeper into the U.S., the report said...

“The bottom line is we are far from having operational control of our borders, particularly the southwest border, and as the GAO reports, there still are no metrics to quantify progress,” said House Homeland Security Committee Chairman Michael McCaul, Texas Republican. “Meanwhile, the threat from groups ranging from Islamist extremists to drug cartels continues to grow.”

Border security has been a chief focus of immigration efforts since 2007, when the last major immigration reform bill failed in Congress. After that failure, Republicans said voters wanted the border secured before any legalization took place, and President Bush poured resources into the Border Patrol.

But the GAO report painted a picture of an agency struggling to come up with ways to measure its effectiveness.

What it does tell us is that on the border, the USBP needs to finish building the fence along all the 2,000 miles of border with Mexico.  It also tells us that ICE SVU has failed miserably in its immigration enforcement mission inside the United States.  Therefore large numbers of Border Patrol Agents can be taken from the border with Mexico and deployed to the interior of the United States for aggressive enforcement action that ICE SVU refuses to perform.