Obama's Amnesty May Cause A Farm Labor SHORTAGE, As Legalized Illegals Take Better Jobs From Americans

Farmers say they are worried that the government’s awarding thousands of illegal aliens with amnesty work permits will cause them to leave for the greener pastures of legal American jobs.

The farmers are probably right. Ag has long been a doorway for illegals to worm their way into decent employment after they have learned a little English and how to work the system. So naturally the owners think the answer to their labor problem is More Immigrants.

Many illegal alien farm pickers, like the fellow shown below, will certainly use Obama’s unconstitutional amnesty to steal a more profitable American job. 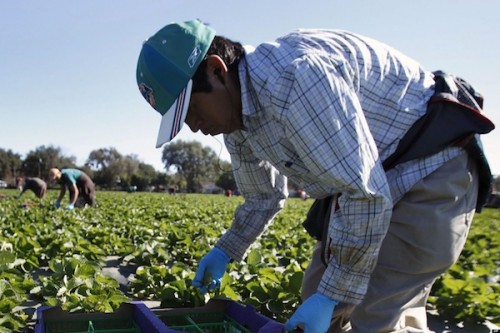 Meanwhile, California’s agricultural central valley continues to have high unemployment among farm workers. For example, Fresno County had an official jobless rate of 11.2 percent in November. So there are workers available closer than Mexico.

Note in the article following that the last farmer quoted is fully aware of the increased use of smart machines into agriculture, so they understand that robots are the future, not Mexican immigrants.

Thousands of the state’s farmworkers, who make up a significant portion of those who will benefit, may choose to leave the uncertainty of their seasonal jobs for steady, year-around work building homes, cooking in restaurants and cleaning hotel rooms.

“This action isn’t going to bring new workers to agriculture,” said Jason Resnick, vice president and general counsel of the powerful trade association Western Growers. “It’s possible that because of this action, agriculture will lose workers without any mechanism to bring in new workers.”

Although details of the president’s immigration policy have yet to be worked out, Resnick said the agricultural workforce has been declining for a decade. Today, the association estimates there is a 15 to 20 percent shortage of farmworkers, which is driving the industry to call for substantial immigration reform from Congress, such as a sound guest worker program.

“Hopefully there will be the opportunity for comprehensive immigration reform,” said Karen Ross, secretary of the California Department of Food and Agriculture. “That’s the right thing to do for this country.”

California’s 330,000 farmworkers account for the largest share of the 2.1 million nationwide, according to the U.S. Bureau of Labor Statistics. Texas comes in a distant second with less than half of California’s farmworkers.

Once Obama’s executive action starts going into effect next year, it will protect the parents of legal U.S. residents from deportation and expand a 2012 program that shields from deportation people brought into the U.S. illegally as children.

Cunha, who has advised the Obama administration on immigration policy, figures that 50,000 of the state’s farmworkers who may benefit from the president’s executive action could leave the fields and packing houses in California’s $46.4 billion agricultural industry.

“How do I replace that?” he said. “I think we’re going to have a problem.”

Many farmworkers are paid above minimum wage, earning more hourly than they will in other industries, but he said that workers that leave will gain year-around jobs and regular paychecks, rather than seasonal employment.

While farmers may face a setback, Obama’s order is good for workers, who support families and fear that any day they may be pulled over driving to work and deported, said Armando Elenes, national vice president of the United Farm Workers.

With proper documentation, workers will feel empowered and be more valuable, Elenes said. Confronted with abuse at work — such as being paid less than minimum wage or denied overtime — workers will be able to challenge their employer or leave, he said.

In addition, their newfound mobility will create competition for farmworkers and potentially increase wages, Elenes said, adding, “It’s going to open up a whole new world for workers. A lot of times, if you’re undocumented, you feel like you’re stuck.”

Ed Kissam, an immigration researcher at the immigrant advocacy group, WKF Giving Fund, said he doubts a significant number of farmworkers will leave the industry. Farmworkers often lack the language, education and technical skills to move up the employment ladder, he said. “Surely some will,” Kissam said. “It’s not going to be a mass exodus.”

Edward Taylor, a researcher at the University of California, Davis, said a shortage of farmworkers could be exacerbated by a dwindling flow of workers from Mexico, the largest supplier of labor to the United States. Taylor said the lower birthrates, more industrial jobs and better schools in rural Mexico are cutting into the supply of farmworkers.

“U.S. and Mexican farmers have to compete for that diminishing supply of farm labor,” he said. “Once this change hits, there’s no going back.”

Central Valley farmer Harold McClarty of HMC Farms, who hires a thousand workers at harvest time, said there is no replacing the human hand for picking the 50 varieties of peaches he grows. His workers pick a single tree five or more times, making sure the fruit they take is ripe.

“We haven’t found any machines that can do anything like that,” he said. “You can’t just pick the whole tree.”